Researchers didn’t know it a year ago, but it turns out that a 1917 image on an astronomical glass plate from the Carnegie Observatories’ collection shows the first-ever evidence of a planetary system beyond our own Sun. This unexpected find was recognized in the process of researching an article about planetary systems surrounding white dwarf stars in New Astronomy Reviews. 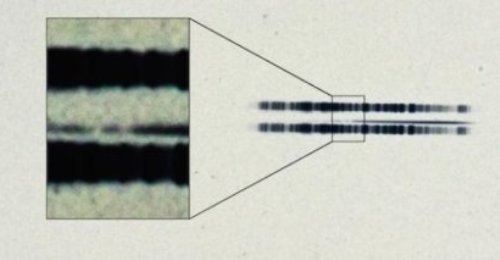 Here’s what happened: about a year ago, the review’s author, Jay Farihi of University College London, contacted Observatories’ Director, John Mulchaey. He was looking for a plate in the Carnegie archive that contained a spectrum of van Maanen’s star, a white dwarf discovered by Dutch-American astronomer Adriaan van Maanen in the very year the plate was made.

Stellar spectra are recordings of the light emitted by distant stars. Spectra spread out all of the component colors of light, like a rainbow from a prism, and they can teach astronomers about a star’s chemical composition. They can also tell them how the light emitted by a star is affected by the chemistry of the things it passes through before reaching us on Earth.

Stellar spectra images allowed 19th century astronomers to develop a system for classifying stars that is still used today. Modern astronomers use digital tools to image stars, but for decades, they would use glass photographic plates both to take images of the sky, and to record stellar spectra.

As requested, the Observatories located the 1917 plate, made by former Observatories Director Walter Adams at Mount Wilson Observatory, which was then part of Carnegie. Other than a notation on the plate’s sleeve indicating that the star looked a bit warmer than our own Sun, everything seemed very ordinary.

However, when Farihi examined the spectrum, he found something quite extraordinary.

The clue was in what’s called an “absorption line” on the spectrum. Absorption lines indicate “missing pieces,” areas where the light coming from a star passed through something and had a particular color of light absorbed by that substance. These lines indicate the chemical makeup of the interfering object.

Carnegie’s 1917 spectrum of van Maanen’s star revealed the presence of heavier elements, such as calcium, magnesium, and iron, which should have long since disappeared into the star’s interior due to their weight.

Only within the last 12 years has it become clear to astronomers that van Maanen’s star and other white dwarfs with heavy elements in their spectra represent a type of planetary system featuring vast rings of rocky planetary remnants that deposit debris into the stellar atmosphere. These recently discovered systems are called “polluted white dwarfs.” They were a surprise to astronomers, because white dwarfs are stars like our own Sun at the end of their lifetimes, so it was not at all expected that they would have leftover planetary material around them at that stage.

“The unexpected realization that this 1917 plate from our archive contains the earliest recorded evidence of a polluted white dwarf system is just incredible,” Mulchaey said. “And the fact that it was made by such a prominent astronomer in our history as Walter Adams enhances the excitement.”

Planets themselves have not yet been detected orbiting van Maanen’s star, nor around similar systems, but Farihi is confident it is only a matter of time.

“The mechanism that creates the rings of planetary debris, and the deposition onto the stellar atmosphere, requires the gravitational influence of full-fledged planets,” he explained. “The process couldn’t occur unless there were planets there.”

“Carnegie has one of the world’s largest collections of astronomical plates with an archive that includes about 250,000 plates from three different observatories–Mount Wilson, Palomar, and Las Campanas,” concluded Mulchaey. “We have a ton of history sitting in our basement and who knows what other finds we might unearth in the future?”