The Earth’s magnetic field permanently protects us from the charged particles and radiation produced by our Sun. This shield is created by the geodynamo process, the rapid motion of huge quantities of liquid iron alloy in the Earth’s outer core. To maintain this magnetic field until the present day, the classical model required the Earth’s core to have cooled by around 3,000° C over the past 4.3 billion years. 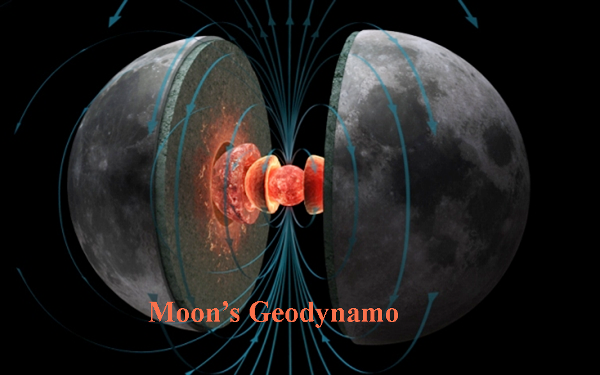 Now, a team of researchers from French National Center for Scientific Research (CNRS) and Université Blaise Pascal1 suggests that, on the contrary, its temperature has fallen by only 300° C. The action of the moon, overlooked until now, is thought to have compensated for this difference and kept the geodynamo active. Their work is published in the March 30 2016 journal Earth and Planetary Science Letters. 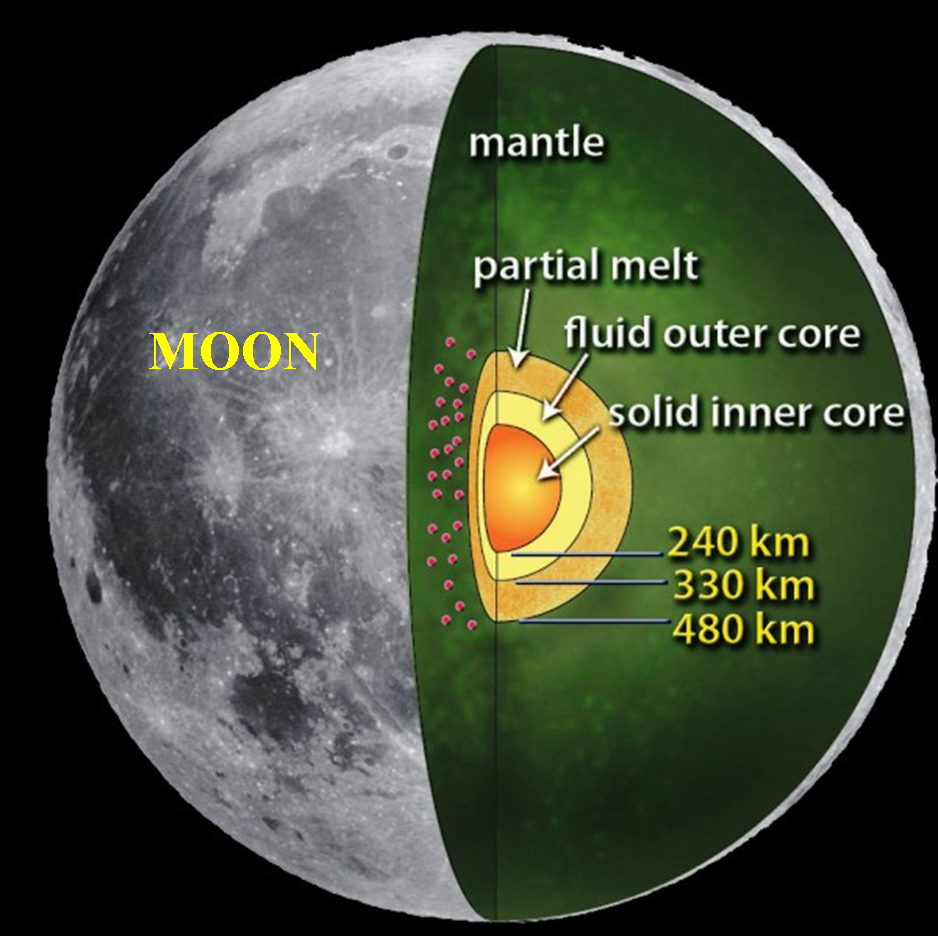 The classical model of the formation of Earth’s magnetic field has raised a major paradox. For the geodynamo to work, the Earth would have had to be totally molten four billion years ago, and its core would have had to slowly cool from around 6800° C at that time to 3800° C today. However, recent modeling of the early evolution of the internal temperature of the planet, together with geochemical studies of the composition of the oldest carbonatites and basalts, do not support such cooling. With such high temperatures being ruled out, the researchers propose another source of energy in their study.

The gravitational effects associated with the presence of the Moon and Sun on Earth induces cyclic deformation of the mantle and oscillations of the axis of rotation. This mechanical forcing applied to the entire planet induces strong currents in the outer core made of an iron alloy of very low viscosity. These currents are sufficient to generate the Earth’s magnetic field.

The Earth has a slightly flattened shape and rotates about an inclined axis that wobbles around the poles. Its mantle deforms elastically due to tidal effects caused by the moon. The researchers show that this effect could continuously stimulate the motion of the liquid iron alloy making up the outer core, and in return generate Earth’s magnetic field. The Earth continuously receives 3700 billion watts of power through the transfer of the gravitational and rotational energy of the Earth-moon-Sun system, and over 1,000 billion watts is thought to be available to bring about this type of motion in the outer core. This energy is enough to generate the Earth’s magnetic field, which together with the moon, resolves the major paradox in the classical theory. The effect of gravitational forces on a planet’s magnetic field has already been well documented for two of Jupiter’s moons, Io and Europa, and for a number of exoplanets. 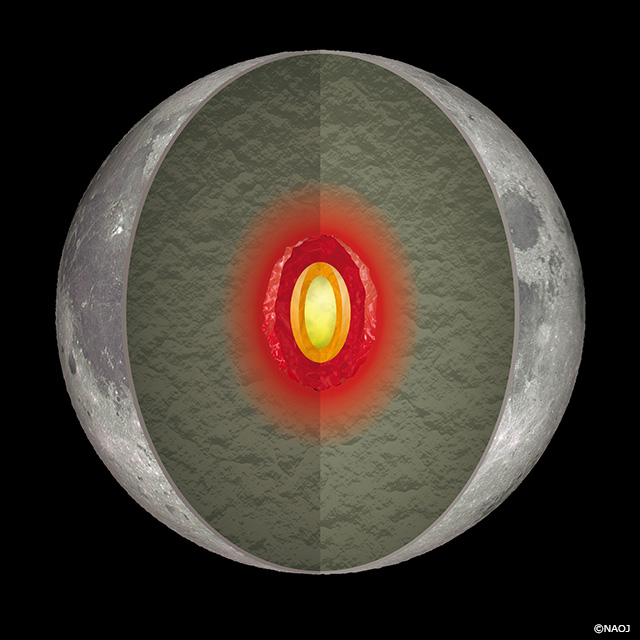 As neither the rotation of the Earth around its axis, or orientation of the axis, or the orbit of the moon are perfectly regular – their combined influence on Earth’s inner and outer core, becomes unstable causing fluctuations in the geodynamo. This phenomenon helps explain what would be the catalyst for the ebb and flow of mantle plumes.

Historically, this could lead to melting peaks in the deep mantle and possible major volcanic events on the surface of the Earth. This new model underlines that the influence of the moon on the Earth therefore goes well beyond the simple case of the tides.

The terrestrial Laser Interferometer Gravitational-wave Observatory (LIGO) detected gravitational waves – fluctuations in the fabric of space-time – produced by a pair of black holes as they spiraled towards each other before merging. The signal lasted less than half a second. 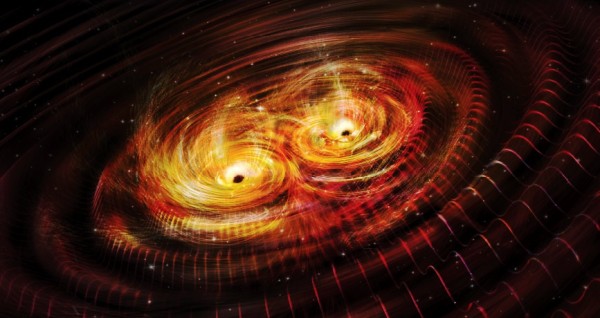 The discovery was the first direct observation of gravitational waves, predicted by Albert Einstein a century ago.

Two days after the detection, the LIGO team alerted a number of ground- and space-based astronomical facilities to look for a possible counterpart to the source of gravitational waves. The nature of the source was unclear at the time, and it was hoped that follow-up observations across the electromagnetic spectrum might provide valuable information about the culprit.

Gravitational waves are released when massive bodies are accelerated, and strong emission should occur when dense stellar remnants such as neutron stars or black holes spiral towards each other before coalescing.

Models predict that the merging of two stellar-mass black holes would not produce light at any wavelength, but if one or two neutron stars were involved in the process, then a characteristic signature should be observable across the electromagnetic spectrum.

Another possible source of gravitational waves would be an asymmetric supernova explosion, also known to emit light over a range of wavelengths.
It was not possible to pinpoint the LIGO source – its position could only be narrowed down to a very long strip across the sky.

Observatories searched their archives in case data had been serendipitously collected anywhere along this strip around the time of the gravitational wave detection. They were also asked to point their telescopes to the same region in search for any possible ‘afterglow’ emission.

INTEGRAL is sensitive to transient sources of high-energy emission over the whole sky, and thus a team of scientists searched through its data, seeking signs of a sudden burst of hard X-rays or gamma rays that might have been recorded at the same time as the gravitational waves were detected.

“We searched through all the available INTEGRAL data, but did not find any indication of high-energy emission associated with the LIGO detection,” says Volodymyr Savchenko of the François Arago Centre in Paris, France. Volodymyr is the lead author of a paper reporting the results, published today in Astrophysical Journal Letters.

The team analysed data from the Anti-Coincidence Shield on INTEGRAL’s SPI instrument. The shield helps to screen out radiation and particles coming from directions other than that where the instrument is pointing, as well as to detect transient high-energy sources across the whole sky.

The team also looked at data from INTEGRAL’s IBIS instrument, although at the time it was not pointing at the strip where the source of gravitational waves was thought to be located.

“The source detected by LIGO released a huge amount of energy in gravitational waves, and the limits set by the INTEGRAL data on a possible simultaneous emission of gamma rays are one million times lower than that,” says co-author Carlo Ferrigno from the INTEGRAL Science Data Center at the University of Geneva, Switzerland.

Subsequent analysis of the LIGO data has shown that the gravitational waves were produced by a pair of coalescing black holes, each with a mass roughly 30 times that of our Sun, located about 1.3 billion light years away. Scientists do not expect to see any significant emission of light at any wavelength from such events, and thus INTEGRAL’s null detection is consistent with this scenario.

Similarly, nothing was seen by the great majority of the other astronomical facilities making observations from radio and infrared to optical and X-ray wavelengths.

The only exception was the Gamma-Ray Burst Monitor on NASA’s Fermi Gamma-Ray Space Telescope, which observed what appears to be a sudden burst of gamma rays about 0.4 seconds after the gravitational waves were detected. The burst lasted about one second and came from a region of the sky that overlaps with the strip identified by LIGO.

This detection sparked a bounty of theoretical investigations, proposing possible scenarios in which two merging black holes of stellar mass could indeed have released gamma rays along with the gravitational waves.

However, if this gamma-ray flare had had a cosmic origin, either linked to the LIGO gravitational wave source or to any other astrophysical phenomenon in the Universe, it should have been detected by INTEGRAL as well. The absence of any such detection by both instruments on INTEGRAL suggests that the measurement from Fermi could be unrelated to the gravitational wave detection.

“This result highlights the importance of synergies between scientists and observing facilities worldwide in the quest for as many cosmic messengers as possible, from the recently-detected gravitational waves to particles and light across the spectrum,” says Erik Kuulkers, INTEGRAL Project Scientist at ESA.

This will become even more important when it becomes possible to observe gravitational waves from space. This has been identified as the goal for the L3 mission in ESA’s Cosmic Vision program, and the technology for building it is currently being tested in space by ESA’s LISA Pathfinder mission.

Such an observatory will be capable of detecting gravitational waves from the merging of supermassive black holes in the centers of galaxies for months prior to the final coalescence, making it possible to locate the source much more accurately and thus provide astronomical observatories with a place and a time to look out for associated electromagnetic emission.

“We are looking forward to further collaborations and discoveries in the newly-inaugurated era of gravitational astronomy,” concludes Erik. 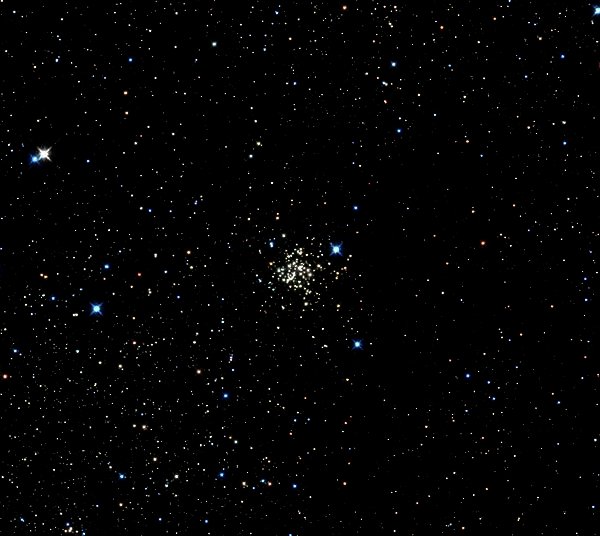