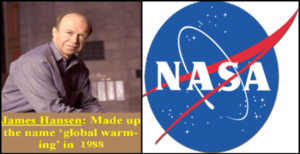 “I appreciate the opportunity to add my name to those who disagree that global warming is man-made,” Theon wrote to the Minority Office at the Environment and Public Works Committee on January 15, 2009. “I was, in effect, Hansen’s supervisor because I had to justify his funding, allocate his resources, and evaluate his results. I did not have the authority to give him his annual performance evaluation,” Theon, the former Chief of the Climate Processes Research Program at NASA Headquarters and former Chief of the Atmospheric Dynamics & Radiation Branch explained.

“Hansen was never muzzled even though he violated NASA’s official agency position on climate forecasting (i.e., we did not know enough to forecast climate change or mankind’s effect on it). Hansen thus embarrassed NASA by coming out with his claims of global warming in 1988 in his testimony before Congress,” Theon wrote. NASA scientist James Hansen who runs NASA’s Goddard Institute for Space Studies (GISS) has created worldwide media frenzy with his dire climate warnings, his call for trials against those who dissent against man-made global warming fear, and his claims that he was allegedly muzzled by the Bush administration despite doing 1,400 on-the-job media interviews.

Theon declared “climate models are useless.” “My own belief concerning anthropogenic climate change is that the models do not realistically simulate the climate system because there are many very important sub-grid scale processes the models either replicate poorly or completely omit,” Theon explained. “Furthermore, some scientists have manipulated the observed data to justify their model results. In doing so, they neither explain what they have modified in the observations, nor explain how they did it. They have resisted making their work transparent so that it can be replicated independently by other scientists. This is clearly contrary to how science should be done. Thus there is no rational justification for using climate model forecasts to determine public policy,” he added.

“As Chief of several of NASA Headquarters’ programs (1982-94), an SES position, I was responsible for all weather and climate research in the entire agency, including the research work by James Hansen, Roy Spencer, Joanne Simpson, and several hundred other scientists at NASA field centers, in academia, and in the private sector who worked on climate research,” Theon wrote of his career. “This required a thorough understanding of the state of the science. I have kept up with climate science since retiring by reading books and journal articles,” Theon added.

Theon was elected a fellow of the American Meteorological Society, given the NASA Exceptional Performance Award twice, elected an Associate Fellow of the American Institute for Aeronautics and Astronautics, and awarded the AIAA’s Losey Medal for contributions to airborne remote sensing. He was also awarded the Radio Wave Award by the Minister of Posts and Telecommunications of Japan for contributions to the Tropical Rainfall Measuring Mission — a joint NASA-Japanese Space Agency satellite. Theon has authored or coauthored more than 50 NASA Reports, journal articles, monographs, chapters in books, and edited two books in the scientific literature.

Hansen ‘is a political activist who spreads fear’

Award-winning NASA Astronaut and Physicist Walter Cunningham of NASA’s Apollo 7 also recently chastised Hansen. “Hansen is a political activist who spreads fear even when NASA’s own data contradict him,” Cunningham wrote in an essay in the July/August 2008 issue of Launch Magazine. “NASA should be at the forefront in the collection of scientific evidence and debunking the current hysteria over human-caused, or Anthropogenic Global Warming (AGW). Unfortunately, it is becoming just another agency caught up in the politics of global warming, or worse, politicized science,” Cunningham wrote.

Gore faces a much different scientific climate in 2009 than the one he faced in 2006 when his film An Inconvenient Truth was released. According to satellite data, the Earth has cooled since Gore’s film was released, Antarctic sea ice extent has grown to record levels, sea level rise has slowed, ocean temperatures have failed to warm, and more and more scientists have publicly declared their dissent from man-made climate fears as peer-reviewed studies continue to man-made counter warming fears.

“Vice President Gore’s and the other promoters of man-made climate fears’ endless claims that the ‘debate is over’ appear to be ignoring scientific reality,” Senator James Inhofe, Ranking Member of the Environment & Public Works Committee.

A U.S. Senate Minority Report released in December 2008 details over 650 international scientists who are dissenting from man-made global warming fears promoted by the UN. Many of the scientists profiled are former UN IPCC scientists and former believers in man-made climate change that have reversed their views in recent years. The report continues to grow almost daily. We have just received a request from an Italian scientist, and a Czech scientist to join the 650 dissenting scientists report. A chemist from the U.S. Naval Academy is about to be added, and more Japanese scientists are dissenting. Finally, many more meteorologists will be added and another former UN IPCC scientist is about to be included. These scientists are openly rebelling against the climate orthodoxy promoted by Gore and the UN IPCC.

The prestigious International Geological Congress, dubbed the geologists’ equivalent of the Olympic Games, was held in Norway in August 2008 and prominently featured the voices of scientists skeptical of man-made global warming fears. Reports from the conference found that Skeptical scientists overwhelmed the meeting, with ‘2/3 of presenters and question-askers hostile to, even dismissive of, the UN IPCC’. In addition, a 2008 canvass of more than 51,000 Canadian scientists revealed 68% disagree that global warming science is “settled.”

A November 25, 2008, article in Politico noted that a “growing accumulation” of science is challenging warming fears, and added that the “science behind global warming may still be too shaky to warrant cap-and-trade legislation.” More evidence that the global warming fear machine is breaking down. Russian scientists “rejected the very idea that carbon dioxide may be responsible for global warming”. An American Physical Society editor conceded that a “considerable presence” of scientific skeptics exists. An International team of scientists countered the UN IPCC, declaring: “Nature, Not Human Activity, Rules the Climate”. India Issued a report challenging global warming fears. International Scientists demanded the UN IPCC “be called to account and cease its deceptive practices.”

The scientists and peer-reviewed studies countering climate claims are the key reason that the U.S. public has grown ever more skeptical of man-made climate doom predictions. Global warming ranks dead last, 20 out of 20 in new Pew survey. Pew Survey: & Survey finds majority of U.S. Voters – ‘51% – now believe that humans are not the predominant cause of climate change’ – January 20, 2009 – Rasmussen Reports.

The chorus of skeptical scientific voices grow louder in 2008 as a steady stream of peer-reviewed studies, analyses, real world data and inconvenient developments challenged the UN’s and former Vice President Al Gore’s claims that the “science is settled” and there is a “consensus.”