Damage or injuries have not yet been confirmed on the Pacific nation, which is made up of 169 islands.

No tsunami warnings are currently in alert, according to the Pacific Tsunami Warning Center.

The earthquake struck at a depth of six miles, around 117 miles north-west of the village of Pangai, which is home to 1,800 people.

WASHINGTON, UNITED STATES: A strong 6.6-magnitude earthquake struck off the west coast of the US State of Alaska Sunday, seismologists said, but no tsunami warning was issued. 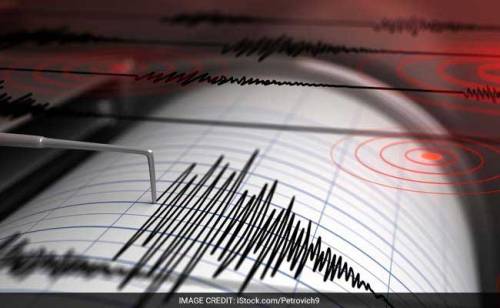 The US Geological Survey (USGS) said the earthquake struck at a depth of 111.8 kilometers (69 miles) and 60 kilometers east of the remote Buldir Island in the Aleutian archipelago that is home to some 8,000 people.

“Overall, the population in this region resides in structures that are resistant to earthquake shaking, though vulnerable structures exist,” USGS said.

The Pacific Tsunami Warning Center did not immediately issue any warnings.

“There is a low likelihood of casualties and damage,” USGS added, assigning the event a “Green alert.”

Hurricane Nate has made landfall near the mouth of the Mississippi River in Louisiana, the US National Hurricane Center (NHC) says. 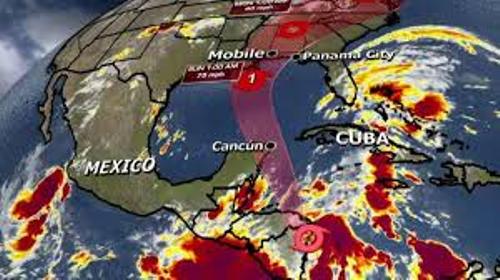 The storm, with maximum sustained winds of 85mph (137km/h), is moving north, and a second landfall is expected on the Mississippi coast later.

The tropical storm has since strengthened and is now a category one hurricane on the Saffir-Simpson scale.

Although not as strong as last month’s Maria and Irma, Nate is expected to bring strong winds and storm surges.

Five ports along the Gulf Coast have also been closed to shipping as a precaution.

Most oil and gas platforms in the US Gulf of Mexico have evacuated their staff and stopped production ahead of the storm.

n its latest update at 03:00 GMT, the NHC said a hurricane warning was in effect for the “mouth of the Pearl River to the Alabama-Florida border”.

Evacuation orders have been put in place for some low-lying areas.

Louisiana Governor John Bel Edwards has declared a state of emergency ahead of the hurricane.

He said more than 1,000 National Guard troops had been mobilised with a number sent to New Orleans to monitor the drainage pumps there. “Anyone in low-lying areas… we are urging them to prepare now,” he said.

A mandatory curfew from 18:00 (23:00 GMT) is in place in New Orleans, where residents from areas outside the city’s levee system have been evacuated.

A tropical storm warning is currently in effect for New Orleans.

The NHC said that Nate “is expected to weaken quickly after landfall, and it is likely to become a tropical storm Sunday morning.

“It should degenerate into a remnant low late Monday.”

Nate went past Mexico’s Yucatan Peninsula – home to the popular beach resorts of Cancun and Playa del Carmen – on Friday night as it headed north, the NHC said.

At least 13 people died in Nicaragua, eight in Costa Rica, three in Honduras and one in El Salvador.

The tail of the storm is still causing problems in the region, where thousands have been forced to sleep in shelters and some 400,000 people in Costa Rica were reported to be without running water.

The Meteorological Agency has raised the warning level by one notch against a volcanic eruption for Shinmoedake peak, located in the Kirishima mountain range bordering between Kagoshima and Miyazaki prefectures. 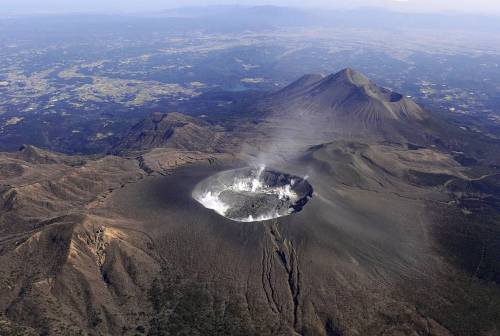 The agency took the step late Thursday night, saying it issued a Level 2 warning for Shinmoedake in light of a recent series of small volcanic tremors observed in the area.

A Level 2 warning restricts entry to areas near the mouth of the volcano, while a Level 1 warning only tells the public of its existence. Level 5, the highest alert, urges people to evacuate.

According to the agency, 12 tremors were observed on Shinmoedake on Sept. 23, and 39 on Oct. 4. The number continues to rise.

Given the developments, small-scale eruptions could occur soon, and rocks could be spewed within a 1-km radius from the mouth, the agency said.

The agency lowered its warning level from 2 to 1 on May 26 after signs that volcanic activity had subsided.

The 5,426-metre high Popocatepetl volcano is the most active in Mexico, with more than 15 major eruptions reported since 1519. 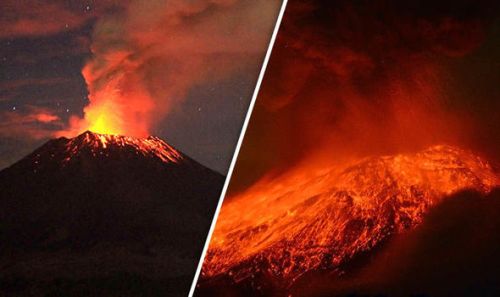 But the volcano, which is also referred to by Mexicans as El Popo, is now causing other problems in the region as neighbours report rivers of mud flowing from the skirt of the mountain following a recent mini eruption.

Experts at geological news service Sismologia Mundial reported the plume as a “mild eruption” and confirmed Popocatepetl is now “normal”.

But now neighbours have warned large rivers of mud from the volcano have flowed into the streets over the last three days, reaching the municipalities of Atlautla and Ozumba.

María de los Ángeles Ibáñez, a neighbour of San Juan Tehuixtitlan, said: “We are afraid. There are times when it comes with more strength and it rumbles, it is not a normal river.”

And residents say they are unable to sleep at night, as they are fearful the plague of mud could be a sign an explosion is imminent.

One neighbour said: “I live in a two-storey house and it has one or two fractures. The authorities came to see it, they said it was safe to live inside.

“But I no longer feel safe, for fear of another earthquake or a volcano eruption.”

On 19 September a deadly 7.1 magnitude earthquake that struck Mexico City and triggered a volcanic eruption.

The Popocatepetl volcano burst into life at the same time as the earthquake, which killed at least 248 people, and sent plumes of thick, black smoke into the sky.

And during the eruption a church collapsed during mass, killing 15 people, in Atzitzihuacan on the slopes of the volcano, Puebla Governor Jose Antonio Gali said.

The landslides after the earthquake created a dam, which with the constant rains has been washed away, dragging tons of mud to the lower parts, especially in Nexpayantla.

Since the earthquake, the neighbours of these communities, the most affected ones, say they can no longer sleep peacefully as they fear what could happen.

The mountain is known to be very active and previously had a significant eruption on August 22, sending a volcanic plume some 4km into the air.

Last year, Popo erupted for the first time since 2000 when ash was propelled a staggering three kilometres into the sky.

Since then, there have been several eruptions.

The eruption comes after a spate of volcanic activity around the world – with all eyes on the Agung volcano in Bali which is showing signs of erupting.

Auroras are lightshows that typically occur at high latitudes such as the Arctic and Antarctic; however, they expand equatorward under severe magnetic storms. Past observations of such unusual auroras can therefore allow us to determine the frequency and severity of magnetic storms. The more information that can be gathered about historic intense magnetic storms, the greater the opportunity to mitigate disruption of power grids in a future event. 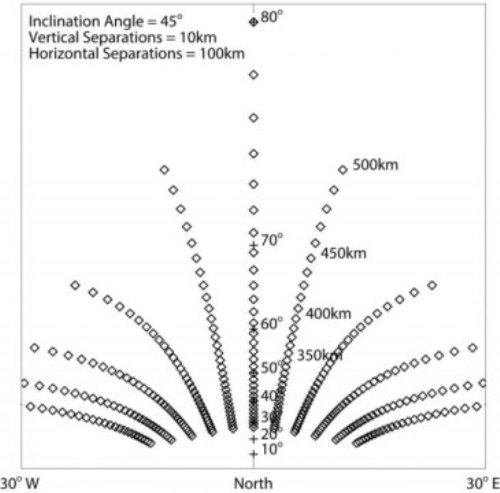 Historical documents are becoming much more accessible for research as newly discovered records surface from private collections across the world. Researchers centered at Tokyo’s National Institute of Japanese Literature (NIJL) and National Institute for Polar Research (NIPR) examined a detailed painting from a Japanese manuscript Seikai (“understanding comets”) with associated commentary describes a red aurora occurring over Kyoto on 17 September 1770. Also investigated were detailed descriptions of the event from a newly discovered diary of the Higashi-Hakura family of Kyoto.

“The enthusiasm and dedication of amateur astronomers in the past provides us an exciting opportunity,” Kiyomi Iwahashi of NIJL says. “The diary was written by a kokugakusha [scholar of ancient Japanese culture], and provides a sophisticated description of the red aurora, including a description of the position of the aurora relative to the Milky Way.”

Using astrometric calculations of the elevations of the Milky Way as it would have been viewed from Kyoto on 17 September 1770, the researchers were able to calculate the geometry of the red aurora and check the results against the details from the Seikai painting and the diary. The success of the description of the aurora according to the historical documents allowed the researchers to estimate the strength of the magnetic storm that caused the September 1770 aurora.

“The magnetic storm on 17 September 1770 was comparable with or slightly larger than the September 1859 magnetic storm that occurred under the influence of the Carrington solar flare. The 1859 storm was the largest magnetic storm on record, in which technological effects were widely observed, “Ryuho Kataoka of NIPR says.” It was lucky for us that the 1770 storm predated our reliance on electricity.”

So how likely are such magnetic storms? ” We are currently within a period of decreasing solar activity, which may spell the end for severe magnetic storms in the near future,” Kataoka says. “However, we actually witnessed an extremely fast coronal mass ejection only several days ago [10 September 2017], which might be powerful enough to cause extreme storms. Fortunately, it just missed the Earth.”

Regardless of the specific likelihood of another perfect magnetic storm, interdisciplinary historical and scientific collaborations are invaluable in providing important physical details that could help us to understand the greatest magnetic storms in history and prepare for any potential future event.

The Fuego Volcano in south Guatemala burst into life on Wednesday plumes of ash blew into the sky in what has been described as on of “the largest recorded eruptions” in the volcano’s history. 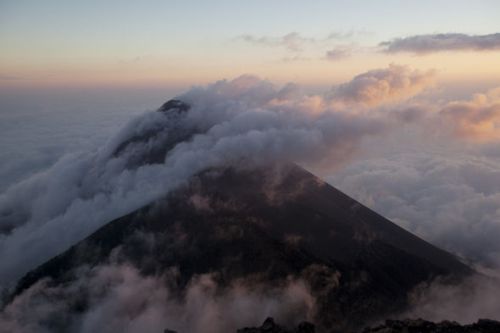 The volcano, known locally as Volcan de Fuego, which translates as ‘Volcano of Fire’, is an extremely active volcano, and this is the seventh time this year that it has erupted.

Guatemala’s National Institute of Seismology, Volcanology, Meteorology and Hydrology (Insivumeh) stated that ash has been spread 20 kilometres in east and northeast directions.

Authorities have also warned that ash could spread all the way to Guatemala City, the capital of Guatemala, some 50 kilometres northwards of the volcano.

Insivumeh warned that “in the eruptive behaviour of the volcano and the variability of the wind, experts do not rule out the possibility that this activity will continue to make ash fall at greater distances”.

Guatemala’s Volcano Observatory added: “These explosions are of a weak, moderate and strong character, expel columns of grey ash at a height of 4400-5,000m (14435-16,405ft) and are driven by wind at distances ranging from 16-20km to the east, northeast”.

Authorities have also alerted aviation bosses to warn them about the plumes of ash which could cause travel chaos.

The 3,800 metre tall Volcan de Fuego is one of South America’s most active volcanos, which is some feat as the continent is dotted with them and over 30 in Guatemala alone.

This is the seventh eruption of the year, but experts say that this is no cause for concern as it has been blowing regularly since the Spanish conquest.