Astronomers have put together the largest and most comprehensive “history book” of galaxies into one single image, using 16 years’ worth of observations from NASA’s Hubble Space Telescope. 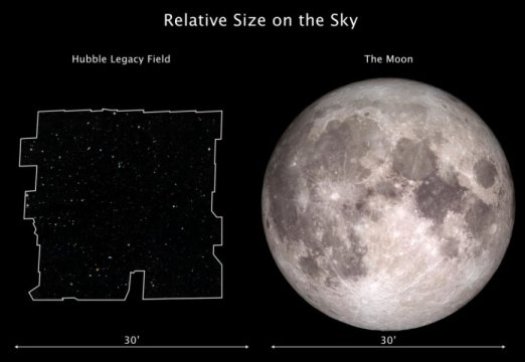 The deep-sky mosaic, created from nearly 7,500 individual exposures, provides a wide portrait of the distant universe, containing 265,000 galaxies that stretch back through 13.3 billion years of time to just 500 million years after the big bang. The faintest and farthest galaxies are just one ten-billionth the brightness of what the human eye can see. The universe’s evolutionary history is also chronicled in this one sweeping view. The portrait shows how galaxies change over time, building themselves up to become the giant galaxies seen in the nearby universe.

“Now that we have gone wider than in previous surveys, we are harvesting many more distant galaxies in the largest such dataset ever produced by Hubble,” said Garth Illingworth of the University of California, Santa Cruz, leader of the team that assembled the image. “This one image contains the full history of the growth of galaxies in the universe, from their time as ‘infants’ to when they grew into fully fledged ‘adults.'”

No image will surpass this one until future space telescopes are launched. “We’ve put together this mosaic as a tool to be used by us and by other astronomers,” Illingworth added. “The expectation is that this survey will lead to an even more coherent, in-depth and greater understanding of the universe’s evolution in the coming years.”

The image yields a huge catalog of distant galaxies. “Such exquisite high-resolution measurements of the numerous galaxies in this catalog enable a wide swath of extragalactic study,” said catalog lead researcher Katherine Whitaker of the University of Connecticut, in Storrs. “Often, these kinds of surveys have yielded unanticipated discoveries which have had the greatest impact on our understanding of galaxy evolution.”

Galaxies are the “markers of space,” as astronomer Edwin Hubble once described them a century ago. Galaxies allow astronomers to trace the expansion of the universe, offer clues to the underlying physics of the cosmos, show when the chemical elements originated, and enable the conditions that eventually led to the appearance of our solar system and life.

This wider view contains about 30 times as many galaxies as in the previous deep fields. The new portrait, a mosaic of multiple snapshots, covers almost the width of the full Moon. The XDF, which penetrated deeper into space than this wider view, lies in this region, but it covers less than one-tenth of the full Moon’s diameter. The Legacy Field also uncovers a zoo of unusual objects. Many of them are the remnants of galactic “train wrecks,” a time in the early universe when small, young galaxies collided and merged with other galaxies.

Assembling all of the observations was an immense task. The image comprises the collective work of 31 Hubble programs by different teams of astronomers. Hubble has spent more time on this tiny area than on any other region of the sky, totaling more than 250 days, representing nearly three-quarters of a year.

“Our goal was to assemble all 16 years of exposures into a legacy image,” explained Dan Magee, of the University of California, Santa Cruz, the team’s data processing lead. “Previously, most of these exposures had not been put together in a consistent way that can be used by any researcher. Astronomers can select the data in the Legacy Field they want and work with it immediately, as opposed to having to perform a huge amount of data reduction before conducting scientific analysis.”

The image, along with the individual exposures that make up the new view, is available to the worldwide astronomical community through the Mikulski Archive for Space Telescopes (MAST). MAST, an online database of astronomical data from Hubble and other NASA missions, is located at the Space Telescope Science Institute in Baltimore, Maryland.

The Hubble Space Telescope has come a long way in taking ever deeper “core samples” of the distant universe. After Hubble’s launch in 1990, astronomers debated if it was worth spending a chunk of the telescope’s time to go on a “fishing expedition” to take a very long exposure of a small, seemingly blank piece of sky. The resulting Hubble Deep Field image in 1995 captured several thousand unseen galaxies in one pointing. The bold effort was a landmark demonstration and a defining proof-of-concept that set the stage for future deep field images. In 2002, Hubble’s Advanced Camera for Surveys went even deeper to uncover 10,000 galaxies in a single snapshot. Astronomers used exposures taken by Hubble’s Wide Field Camera 3 (WFC3), installed in 2009, to assemble the eXtreme Deep Field snapshot in 2012. Unlike previous Hubble cameras, the telescope’s WFC3 covers a broader wavelength range, from ultraviolet to near-infrared.

This new image mosaic is the first in a series of Hubble Legacy Field images. The team is working on a second set of images, totaling more than 5,200 Hubble exposures, in another area of the sky. In the future, astronomers hope to broaden the multiwavelength range in the legacy images to include longer-wavelength infrared data and high-energy X-ray observations from two other NASA Great Observatories, the Spitzer Space Telescope and Chandra X-ray Observatory.

The vast number of galaxies in the Legacy Field image are also prime targets for future telescopes. “This will really set the stage for NASA’s planned Wide Field Infrared Survey Telescope (WFIRST),” Illingworth said. “The Legacy Field is a pathfinder for WFIRST, which will capture an image that is 100 times larger than a typical Hubble photo. In just three weeks’ worth of observations by WFIRST, astronomers will be able to assemble a field that is much deeper and more than twice as large as the Hubble Legacy Field.”

In addition, NASA’s upcoming James Webb Space Telescope will allow astronomers to push much deeper into the legacy field to reveal how the infant galaxies actually grew. Webb’s infrared coverage will go beyond the limits of Hubble and Spitzer to help astronomers identify the first galaxies in the universe.