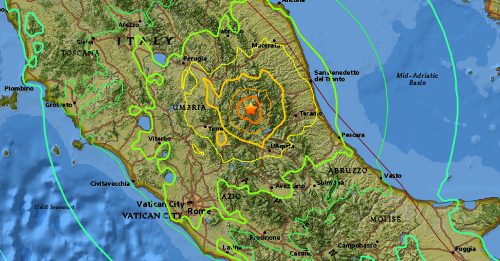 At least 14 people died following the 6.2-magnitude earthquake, according to CNN affiliate RAI.

The earthquake hit 10 kilometers (6.2 miles) southeast of Norcia at 3:36 a.m., the United States Geological Survey said. Its tremors rattled Rome about 100 miles away.

‘The town is no more’

In Amatrice, buildings collapsed and the mountainous town was left in ruins.

“The town is no more,” Mayor Sergio Pirozzi told the affiliate. “I have an appeal to make: we have access roads to the town cut off and people under the rubble, help us.”

He said there was no power, and it was crucial for rescue crews to get to the town.

“We don’t have any more light (electricity) and it is urgent to clear the access roads,” he said.

Charlotte Smith, coach of Elon University women’s basketball team in North Carolina, was in Rome with her players when the quake hit.

“It lasted for at least 30 seconds. The entire hotel was shaking,” she said. “I went down to the lobby and there were a lot of people waiting there. … Then an earthquake happened 30 minutes later.”

She said their flight is still on schedule to leave for the United States later Wednesday.

Michael Gilroy was on the second floor of a three-story building in Montepulciano when the earthquake hit. It sent them fleeing into the night

“It felt like the bed was on rollers,” he said.

“It was initially very confusing. I’m from California and had a sense of what it may be. And we ran out to the main area and the chandelier was swaying back and forth. At that point, we knew we had to get out of the building as fast as we can.”

Gilroy, his girlfriend and other hotel guests waited outside in a clear area.

“We’re going to wait for daylight and see what happens from there,” he said.

About an hour after the earthquake, a 5.5-magnitude aftershock hit near Norcia, one of several that followed.

“At that shallowness and magnitude of 6.2, we’re going to expect lots of aftershocks for next several hours and maybe the next several days,” said Jessica Turner of the USGS.

Landslides are likely because the earthquake struck in a mountainous area, she said.

Although the extent of damage and injuries was not immediately clear, the earthquake could be devastating.

“Overall, the population in this region resides in structures that are a mix of vulnerable and earthquake resistant construction,” the USGS said.

It described the buildings as un-reinforced brick with mud and concrete frame with infill construction.

In May 2012, a pair of earthquakes killed dozens of people in northern Italy.

In April 2009, a 6.3-magnitude earthquake hit central Italy, killing 295. The earthquake Wednesday struck an area close to the 2009 earthquake.

The US Embassy in Italy urged Americans to check-in via social media and let loved ones know they are safe.