Our solar system began as a cloud of gas and dust. Over time, gravity slowly pulled these bits together into the Sun and planets we recognize today. While not every system is friendly to life, astronomers want to piece together how these systems are formed. 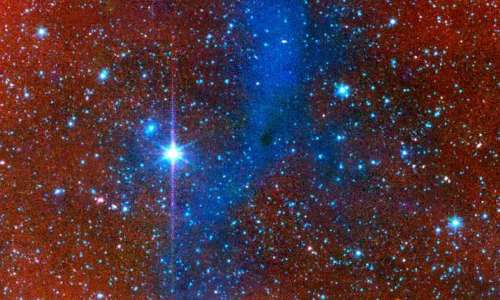 A challenge to this research is the opacity of dust clouds to optical wavelengths (the ones that humans can see). So, astronomers are experimenting with different wavelengths, such as infrared light, to better see the center of dense dust clouds, where young stars typically form.

Recently, astronomers used data from NASA’s Spitzer Space Telescope—a powerful space observatory launched in 2003 that observes the Universe in infrared light—to look at a molecular cloud called L183, which is about 360 light-years away in the constellation Serpens Cauda (the serpent). Their goal was to see how light scattering affects the view of the cloud at the mid-infrared wavelength of 8 microns (μm). Ultimately, the astronomers hope to use this data to get a better look inside the clouds.

“One thing we have to do is evaluate the mass that is sitting in the center of the cloud, which is ready to collapse to make a star,” said co-author Laurent Pagani, a researcher at the National Center for Scientific Research (CNRS) in Paris, France. 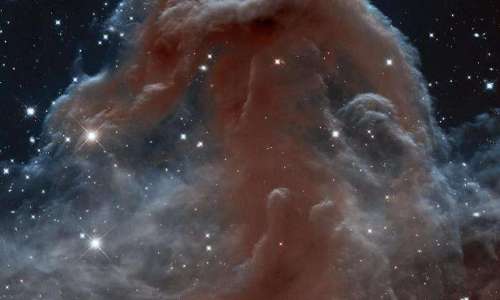 His former doctoral student, Charlène Lefèvre, led the research. Their work was recently published in the journal Astronomy and Astrophysics under the title, “On the importance of scattering at 8 μm: Brighter than you think.” Funding for the research came from CNRS and the French government.

Dust clouds are tough to see through not only because of the dust itself, but also because the gases present are not very visible in telescopes observing in the infrared. Clouds are mainly made up of hydrogen and helium, which emit no radiation in the infrared or millimeter wavelengths. These two elements make up 98 percent of the mass of the cloud, meaning most of it is escaping any kind of measurement.

For this project, Pagani and his team attempted to measure the amount of dust absorption at 8 microns for the cloud L183. It’s common to find light at this wavelength throughout the galaxy, making it a potential measuring tool for different clouds. By measuring the absorption, scientists can estimate how much light is coming from the front of the cloud to the back of the cloud; in other words, by how much the light from the background is diminished.

In so doing, astronomers hope to gain a better understanding about how young stars form. Other, unrelated studies of dust clouds are also looking at where elements—including those grouped in molecules associated with life, such as water—are situated in young solar systems. 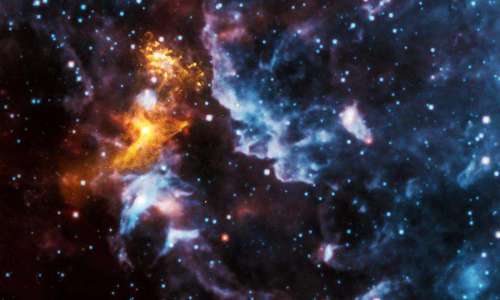 The method appears to work, but there are limitations, the researchers concluded. Different types of dust clouds appear to be more or less sensitive to different wavelengths of light, making it difficult to see what is inside this region.

“There is not only absorption, but also scattering [in L183], and this scattering diminishes the contrast,” Pagani said. “You have the light that is absorbed by the dust, but the dust is also emitting or scattering light towards the observer. It looks less deep than it actually is, if you don’t take into account the scattering.”
Lefèvre was able to use the 8-micron scattering model correctly to fit other observations of the cloud. However, if she tried to observe using other wavelengths—such as 100 microns or 200 microns—she saw a very different picture concerning dust absorption. It’s possible that some of the measurements were affected by ice on the dust, which was not accounted for by her radiative transfer model, Pagani said.

More work will be required. The two researchers (Lefèvre is now a post-doctoral researcher at IRAM, the international Institute for Millimeter Radio-Astronomy but still working with Pagani) are using more grain types to try different methods to measure clouds at various wavelengths. “If this works, we know what kind of grains work in the clouds,” Pagani said. “If it doesn’t work, we have to talk to the theoreticians to modify [the models] to fit the observations.”