The last million years of Earth’s history has been dominated by the cyclic advance and retreat of ice sheets over large swaths of North America, with ice ages occurring every 40,000 years or so.

While conventional wisdom says that this icy ebb and flow is an interaction between the water and atmosphere, the cause of the rapid transition between alternating cold glacial and warmer interglacial periods has been a mystery.

Until now. An article appearing in the Jan. 28 issue of the journal Science sheds new light on the role that the Earth itself may play in this climatological ballet.

UConn marine scientist David Lund and his colleagues studied hydrothermal activity along the mid-ocean ridge system – the longest mountain range in the world, which extends some 37,000 miles along the ocean floor – and found a link between pressure and temperature changes.

Their research suggests that the release of hot molten rock, or magma, from beneath the Earth’s crust in response to changes in sea level plays a significant role in the Earth’s climate by causing oceans to alternately warm and cool. This change in temperature is attributed to the release of heat and carbon dioxide (CO2) into the deep ocean.

During cold glacial intervals, ice sheets reached as far south as Long Island and Indiana, while during warm periods, the ice rapidly retreated to Greenland. 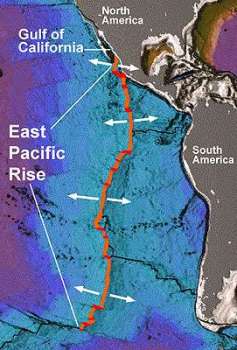 There is evidence that when ice sheets grow, sea level lowers and significant pressure is taken off the ocean ridges. But, as the pressure lessens, the mantle begins melting, which, in turn, warms the water and causes the ice to begin melting. Then, as the ice melts, sea levels rise, causing pressure on the mountain ranges to increase and activity within the mountain ranges to slow.

Think of the effect that applying pressure to a wound has in slowing the flow of bleeding.

The release of molten rock through volcanic vents or fissures is driven by seafloor spreading and decompression melting of the upper mantle, the partially molten layer just beneath the earth’s crust.

Well documented sedimentary records from the East Pacific Rise (EPR) – a mid-ocean ridge extending roughly from Antarctica to the Gulf of California – show evidence of increased hydrothermal activity at the ends of the last two glacial eras.

The results establish the timing of hydrothermal anomalies. Says Lund, “Our results support the hypothesis that enhanced ridge magmatism [the release of molten rock through volcanic vents or fissures], hydrothermal output, and perhaps mantle CO2 flux act to reduce the size of ice sheets.”