When major earthquakes occur, they displace enormous amounts of mass. This motion creates tiny perturbations in Earth’s gravitational field that travel at the speed of light—more than 4 orders of magnitude faster than the elastic seismic waves emanating from the same tremor. Because these prompt elastogravity signals (PEGS) precede seismic waves, the perturbations have the potential to improve early-warning systems by reducing the time it takes to estimate the size of large-magnitude earthquakes. 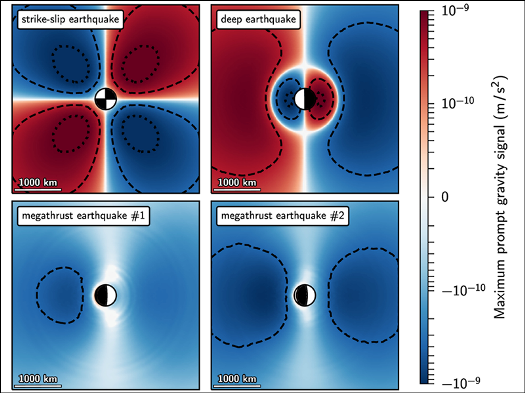 The weakness of these elastogravity waves, however, has made them extremely difficult to detect; the first PEGS observations weren’t published until 2016. Now Vallée and Juhel report multiple new observations of these signals from five earthquakes ranging in magnitude from 7.9 to 8.8, significantly smaller events than the magnitude 9.1 Tohoku earthquake from which their existence was first discovered.

The researchers identified these faint signals using a multistep approach. First, to better understand the conditions under which elastogravity waves are easiest to detect, the team developed a series of numerical simulations to evaluate how the depth and type of earthquake affect the signals’ expected amplitude. The results, which indicate that shallow strike-slip and deep events have a greater chance of being recorded than megathrust subduction zone earthquakes, helped inform the authors’ ensuing analysis of the records from large earthquakes that have occurred within the past 25 years.

This analysis revealed the presence of PEGS preceding seismic waves during several major earthquakes. These include the 2012 magnitude 8.6 Wharton Basin event, the largest strike-slip earthquake ever recorded, and two large and very deep tremors: the 2018 magnitude 8.2 Fiji earthquake and the 1994 magnitude 8.2 Bolivia event. By combining observations from several instruments, the team was also able to improve the signal-to-noise ratios enough to detect elastogravity waves from two additional tremors, including the 2018 magnitude 7.9 strike-slip event off Alaska.

The results show that the successful detection of PEGS is not restricted to exceptional (greater than magnitude 9) megathrust earthquakes. These findings indicate that PEGS observations have the potential to significantly improve the speed and reliability of early-warning systems in a lot of settings where the faster detection of major earthquakes could enhance rapid emergency response and/or improve tsunami hazard assessments.