Tilted pillars, cracked steps, and sliding stone canopies in a number of 7th-century A.D. temples in northwest India are among the telltale signs that seismologists are using to reconstruct the extent of some of the region’s larger historic earthquakes. 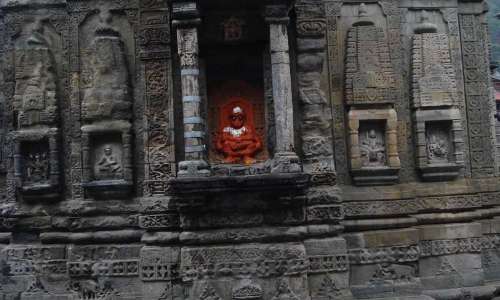 In their report published online July 27 in Seismological Research Letters, Mayank Joshi and V.C. Thakur of the Wadia Institute of Himalayan Geology show how the signs of destructive earthquakes are imprinted upon the ancient stone and wooden temples.

The type of damage sustained by temples clustered around two towns in the region—Chamba and Bharmour—suggests that the Chamba temples may have been affected by the 1555 earthquake, while the Bharmour temples were damaged by the 1905 quake, the seismologists conclude.

The epicenter of the 1555 earthquake is thought to be in the Srinagar Valley, about 200 kilometers northwest of Chamba. If the 1555 earthquake did extend all the way to Chamba, Joshi said, “this further implies that the eastern Kashmir Himalaya segment between Srinagar and Chamba has not been struck by a major earthquake for the last 451 years.”

The stress built up in this section of the fault, Joshi added, “may be able to generate an earthquake of similar magnitude to that of the 2005 Kashmir earthquake that devastated the eastern Kashmir.”

To better understand the historical earthquake record in the region, Joshi and Thakur examined several temples in the region to look for telltale signs of earthquake damage. It can be difficult at first to distinguish whether a tilted pillar, for example, is due to centuries of aging or to earthquake deformation.
But Joshi noted that archaeoseismologists are trained to look for regular kinds of deformation to a structure—damages “that have some consistency in their pattern and orientation,” said Joshi. “In the cases of aging and ground subsidence, there is no regular pattern of damage.”

At the temples, the researchers measured the tilt direction, the amount of inclination on pillars and the full temple structures, and cracks in building stones, among other types of damage. They then compared this damage to historic accounts of earthquakes and information about area faults to determine which earthquakes were most likely to have caused the damage.

“In the Chamba-area temples, there are some marker features that indicate that the body of the temple structure has suffered some internal deformation,” said Joshi. “The pillars and temple structures are tilted with respect to their original positions. The rooftop portions show tilting or displacement.”
Other earthquake damage uncovered by the researchers included upwarping of stone floors, cracked walls, and a precariously leaning fort wall.