What happens when the solar wind suddenly starts to blow significantly harder? A down-to-Earth answer would be that stronger solar winds could possibly damage a residential or commercial solar panel installation as well as disrupt satellites and electronic communications. But what about the wider picture beyond our Earth? What else can strong solar winds affect.

According to two recent studies, the boundaries of our entire solar system balloon outward-and an analysis of particles rebounding off of its edges will reveal its new shape. 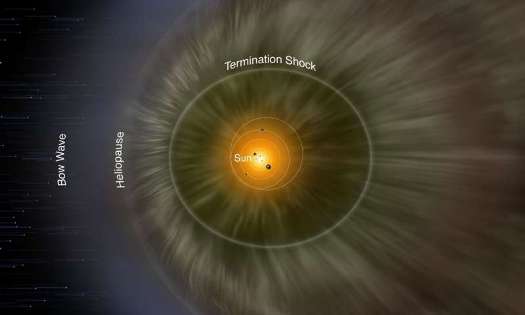 In late 2014, NASA spacecraft detected a substantial change in the solar wind. For the first time in nearly a decade, the solar wind pressure-a combined measure of its speed and density-had increased by approximately 50 percent and remained that way for several years thereafter. Two years later, the Interstellar Boundary Explorer, or IBEX, spacecraft detected the first sign of the aftermath. Solar wind particles from the 2014 pressure increase had reached the edge of the heliosphere, neutralized themselves, and shot all the way back to Earth. And they had a story to tell.

In two recent articles, scientists used IBEX data along with sophisticated numerical models to understand what these rebounding atoms can tell us about the evolving shape and structure of our heliosphere, the giant bubble carved out by the solar wind.

“The results show that the 2014 solar wind pressure increase has already propagated from the Sun to the outer heliosphere, morphing and expanding our heliosphere’s boundaries in their closest direction,” said David McComas, the principal investigator for the IBEX mission at Princeton University in Princeton, New Jersey. “IBEX data pouring in over the next few years will let us chart the expansion and evolving structure of the other portions of the heliosphere’s outer boundaries.”

From the Sun to the edge of the solar system-and backAt the crux of the story are energetic neutral atoms-high-energy particles produced at the very edge of our solar system.

As the solar wind flows out from the Sun at supersonic speeds, it blows up a bubble known as the heliosphere. The heliosphere encases all the planets in our solar system and much of the space beyond them, separating the domain of our Sun from that of interstellar space.

But the solar wind’s journey from the Sun is not a smooth ride. On its way to the very edge of our heliosphere, known as the heliopause, the solar wind passes through distinct layers. The first of these is known as the termination shock.

Before passing the termination shock, the solar wind expands rapidly, largely unimpeded by outside material.

“But at the termination shock, roughly 9.3 billion miles away from us in every direction, the solar wind slows down abruptly. Beyond this point it continues to move outwards, but it is much hotter,” said Eric Zirnstein, lead author of one of the papers at Princeton.

Once beyond the termination shock, solar wind particles enter a special limbo zone known as the heliosheath. While the termination shock is essentially spherical, the edges of the heliosphere are thought to describe more of an arc around the Sun as it moves through space-closer to the Sun toward the front, and extending long behind it, not unlike a comet with a tail. Along these boundaries, solar wind particles mix with particles from interstellar space. Collisions are inevitable: the hot, electrically-charged solar wind particles bang into the slower, colder neutral atoms from interstellar space, stealing an electron and becoming neutral themselves.

“From there they go travelling ballistically through space, and some make it all the way back to Earth,” Zirnstein said. “These are the energetic neutral atoms that IBEX observes.”

In late 2016, when IBEX’s energetic neutral atom imager began to pick up an unusually strong signal, Professor McComas and his team set out to investigate its cause. Their findings are reported in an article published on March 20, 2018, in the Astrophysical Journal Letters.

The energetic neutral atoms were coming from about 30 degrees south of the interstellar upwind direction, where the heliosheath was known to be closest to Earth.

To quantify its connection to the 2014 solar wind pressure increase, McComas and his team turned to numerical simulations, working out how such a pressure increase could affect the energetic neutral atoms that IBEX observes.

“These types of simulations involve a model for the physics, which then gets turned into equations, which are in turn solved on a supercomputer,” said Jacob Heerikhuisen, a coauthor on both papers at the University of Alabama in Huntsville.

Using computer models, the team simulated an entire heliosphere, jolted it with a solar wind pressure increase, and let it run the numbers. The simulation completed a story only hinted at by the data.

According to the simulation, once the solar wind hits the termination shock it creates a pressure wave. That pressure wave continues on to the edge of the heliosphere and partially rebounds backwards, forcing particles to collide within the (now much denser) heliosheath environment that it just passed through. That’s where the energetic neutral atoms that IBEX observed were born.

The simulations provided a compelling case: IBEX was indeed observing the results of the 2014 solar wind pressure increase, more than two years later.

But the simulation didn’t stop there. It also revealed that the 2014 solar wind pressure increase would, over time, continue to blow up the heliosphere even further. Three years after the solar wind pressure increase-by the time the article was published-the termination shock, the inner bubble within the heliosphere, should expand by seven astronomical units, or seven times the distance from Earth to the Sun. The heliopause, the outer bubble, should expand by two astronomical units, with an additional two the following year.

In short, by cranking up the pressure of the solar wind, our heliosphere today is bigger than it was just a few years ago.

McComas and colleagues studied the very first signs of the 2014 solar wind pressure increase. But watching the data over the coming years may tell us even more-this time about the evolving shape of our heliosphere.

“There have been many studies, some from quite a while ago, predicting what the heliosphere shape should look like,” Zirnstein, the lead author of the paper, reports. “But it’s still very much up for debate in the modelling community. We’re hoping that the 2014 solar wind pressure increase could help with that.”

Using the same data and simulations used in the previous paper, Zirnstein and colleagues ran the clock forward, modeling the heliosphere eight years after the 2014 solar wind pressure increase. The results describe not only the past, but also model the future. The paper was published on May 30, 2018, in The Astrophysical Journal.

“What we think we should see in the near future is a ring, expanding across the sky, marking the change in energetic neutral atom flux over time,” said Zirnstein. “This ring expands away from the point of initial contact in the outer heliosphere, towards the directions of the heliotail.”

Although the initial signal detected by IBEX in 2016 was a solid circle, it won’t stay that way. As the 2014 solar wind reaches points of the heliopause further and further away, they take longer to bounce back, like an echo off of a far-away wall. The heliosphere’s rounded shape causes this echo to reflect back in the form of a ring.

But the key finding came from watching the ring as it expands.

In their simulation, Zirnstein and colleagues found that the precise rate at which the ring expands depended in part on the distances between the various layers of the heliosphere: the termination shock, the heliopause, and the part of the heliosheath where the energetic neutrals were produced. Zirnstein realized he had found a new way to measure the size and shape of the heliosphere.

“We could estimate the distances to the different boundaries of the heliosphere just by looking at this ring changing over time in the sky,” said Zirnstein.

Deformities in the ring-deviations from a perfect circle-could also reveal asymmetries in the heliosphere’s overall shape. “It depends on how symmetric or asymmetric the heliosphere is,” Zirnstein added. “If the heliosphere was an ideal ‘comet shape,’ the ring should expand symmetrically over time. But in reality that’s probably not going to happen-we’ll have to wait and see what IBEX tell us.”

Zirnstein expressed excitement about the possibility of learning the true shape of the heliosphere.

“Over the next few years with more IBEX data, my hope is that we can build a 3-D picture of the shape of the heliosphere,” said Zirnstein.

The results of these two studies have important practical implications. “Connecting changes in the Sun with energetic neutral atom observations will help us understand long term changes in the hazardous conditions for space radiation environment-a sort of space climate as opposed to space weather,” McComas said. “As the solar wind blows more and less hard, and our solar bubble expands and contracts, which directly affects the amount of cosmic rays that can enter the heliosphere, potentially endangering astronauts on long duration spaceflights.”

But the results also underscore the incredible power of our closest star. Changes on the Sun, including the solar wind, have significant consequences extending billions of miles into space where, to date, only the two Voyager spacecraft have ever ventured. With techniques like energetic neutral atom imaging, we cannot just picture, but precisely measure these far-off portions of the heliosphere-our home in the galaxy.