Imagine trying on new pair of spectacles and when glancing around to test them you spot a monster—that’s exactly what happened when the ASKAP antennas were turned towards a group of three merging galaxies 1.8 billion light years away. 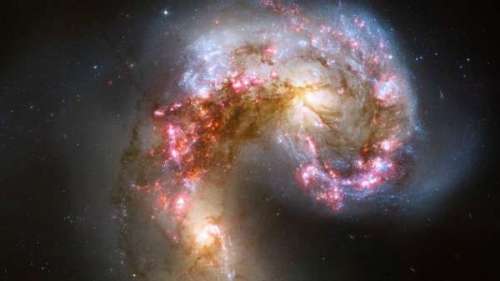 The monster concerned is a supermassive black hole with a mass 3 billion times that of the Sun.

All galaxies are believed to house a huge black hole at their centre, but this one is gigantic by cosmic standards.

It is 750 times bigger than the black hole at the centre of the Milky Way—which is a modest 4 million solar masses.

Black holes grow by drawing in material including other black holes that venture too close, and in this case the black holes from the three galaxies have merged.

Dr Lisa Harvey-Smith from CSIRO Astronomy and Space Science and her team knew of a strong source of radiowaves, known as an astrophysical maser, in the group and pointed the array of antennas toward it.

The results were checked by the Australia Telescope Compact Array telescope at Narrabri which found the gas forming the maser was moving at around 600 kilometres per second, or around 500 times the speed of a rifle cartridge.

Knowing the speed of the gas they were able to directly measure the mass of the black hole that was causing the gas to swirl. 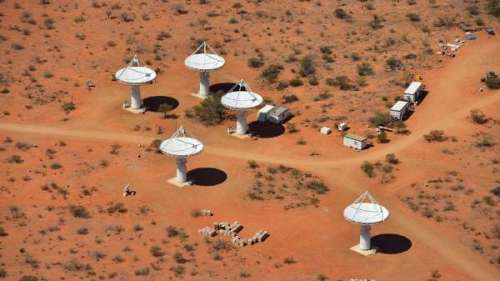 ASKAP (the Australian Square Kilometre Array Pathfinder) is the precursor to the Square Kilometer Array and is being built in the Murchison.

When finished ASKAP will have 36 identical antennas, each 12m in diameter that will work together as a single instrument.

“We currently have nine antennas doing commissioning and testing, and our early science program will begin when we have 12 antennas ready.”

Dr George Heald who leads the CSIRO Astrophysics group in Perth says ASKAP’s advantage lies in sporting CSIRO’s own receiver technology called Phased Array Feed (PAF), which is like a digital camera for use in radio astronomy.

“It allows us to map a huge area of the sky a lot faster than by using a traditional radio telescope,” he says.

Perth team member Aidan Hotan says that most of the science planned for ASKAP has to do with understanding the structure and composition of the universe out to greater distances and over wider areas than ever before.