Many stars explode as luminous supernovae when, swollen with age, they run out of fuel for nuclear fusion. But some stars can go supernova simply because they have a close and pesky companion star that, one day, perturbs its partner so much that it explodes. 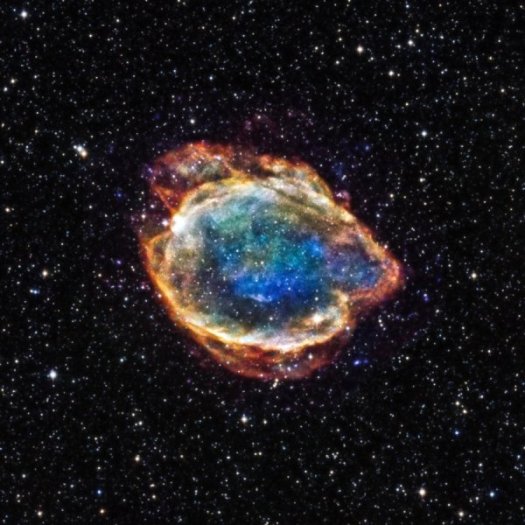 These latter events can happen in binary star systems, where two stars attempt to share dominion. While the exploding star gives off lots of evidence about its identity, astronomers must engage in detective work to learn about the errant companion that triggered the explosion.

On Jan. 10 at the 2019 American Astronomical Society meeting in Seattle, an international team of astronomers announced that they have identified the type of companion star that made its partner in a binary system, a carbon-oxygen white dwarf star, explode. Through repeated observations of SN 2015cp, a supernova 545 million light years away, the team detected hydrogen-rich debris that the companion star had shed prior to the explosion.

“The presence of debris means that the companion was either a red giant star or similar star that, prior to making its companion go supernova, had shed large amounts of material,” said University of Washington astronomer Melissa Graham, who presented the discovery and is lead author on the accompanying paper accepted for publication in The Astrophysical Journal.

The supernova material smacked into this stellar litter at 10 percent the speed of light, causing it to glow with ultraviolet light that was detected by the Hubble Space Telescope and other observatories nearly two years after the initial explosion. By looking for evidence of debris impacts months or years after a supernova in a binary star system, the team believes that astronomers could determine whether the companion had been a messy red giant or a relatively neat and tidy star.

The team made this discovery as part of a wider study of a particular type of supernova known as a Type Ia supernova. These occur when a carbon-oxygen white dwarf star explodes suddenly due to activity of a binary companion. Carbon-oxygen white dwarfs are small, dense and — for stars — quite stable. They form from the collapsed cores of larger stars and, if left undisturbed, can persist for billions of years.

Type Ia supernovae have been used for cosmological studies because their consistent luminosity makes them ideal “cosmic lighthouses,” according to Graham. They’ve been used to estimate the expansion rate of the universe and served as indirect evidence for the existence of dark energy.

“All of the science to date that has been done using Type Ia supernovae, including research on dark energy and the expansion of the universe, rests on the assumption that we know reasonably well what these ‘cosmic lighthouses’ are and how they work,” said Graham. “It is very important to understand how these events are triggered, and whether only a subset of Type Ia events should be used for certain cosmology studies.”

“By looking years after the initial event, we were searching for signs of shocked material that contained hydrogen, which would indicate that the companion was something other than another carbon-oxygen white dwarf,” said Graham.

In the case of SN 2015cp, a supernova first detected in 2015, the scientists found what they were searching for. In 2017, 686 days after the supernova exploded, Hubble picked up an ultraviolet glow of debris. This debris was far from the supernova source — at least 100 billion kilometers, or 62 billion miles, away. For reference, Pluto’s orbit takes it a maximum of 7.4 billion kilometers from our sun.

The Hubble Space Telescope was essential for detecting the ultraviolet signature of the companion star’s debris for SN 2015cp. In the fall of 2017, the researchers arranged for additional observations of SN 2015cp by the W.M. Keck Observatory in Hawaii, the Karl G. Jansky Very Large Array in New Mexico, the European Southern Observatory’s Very Large Telescope and NASA’s Neil Gehrels Swift Observatory, among others. These data proved crucial in confirming the presence of hydrogen and are presented in a companion paper lead by Chelsea Harris, a research associate at Michigan State University.

“The discovery and follow-up of SN 2015cp’s emission really demonstrates how it takes many astronomers, and a wide variety of types of telescopes, working together to understand transient cosmic phenomena,” said Graham. “It is also a perfect example of the role of serendipity in astronomical studies: If Hubble had looked at SN 2015cp just a month or two later, we wouldn’t have seen anything.”

Graham is also a senior fellow with the UW’s DIRAC Institute and a science analyst with the Large Synoptic Survey Telescope, or LSST.

“In the future, as a part of its regularly scheduled observations, the LSST will automatically detect optical emissions similar to SN 2015cp — from hydrogen impacted by material from Type Ia supernovae,” said Graham said. “It’s going to make my job so much easier!”