Astronomers have used data from NASA’s Chandra X-ray Observatory to make a discovery that may have profound implications for understanding how the magnetic field in the Sun and stars like it are generated. 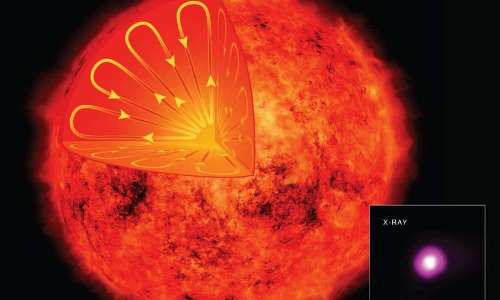 Researchers have discovered that four old red dwarf stars with masses less than half that of the Sun are emitting X-rays at a much lower rate than expected.

X-ray emission is an excellent indicator of a star’s magnetic field strength so this discovery suggests that these stars have much weaker magnetic fields than previously thought.

Since young stars of all masses have very high levels of X-ray emission and magnetic field strength, this suggests that the magnetic fields of these stars weakened over time. While this is a commonly observed property of stars like our Sun, it was not expected to occur for low-mass stars, as their internal structure is very different.

The Sun and stars like it are giant spheres of superheated gas. The Sun’s magnetic field is responsible for producing sunspots, its 11-year cycle, and powerful eruptions of particles from the solar surface. These solar storms can produce spectacular auroras on Earth, damage electrical power systems, knock out communications satellites, and affect astronauts in space.

“We have known for decades that the magnetic field on the Sun and other stars plays a huge role in how they behave, but many details remain mysterious,” said lead author Nicholas Wright of Keele University in the United Kingdom. “Our result is one step in the quest to fully understand the Sun and other stars.”

The rotation of a star and the flow of gas in its interior both play a role in producing its magnetic field. The rotation of the Sun and similar stars varies with latitude (the poles versus the equator) as well as in depth below the surface. Another factor in the generation of magnetic field is convection. Similar to the circulation of warm air inside an oven, the process of convection in a star distributes heat from the interior of the star to its surface in a circulating pattern of rising cells of hot gas and descending cooler gas.

Convection occurs in the outer third (by radius) of the Sun, while the hot gas closer to the core remains relatively still. There is a difference in the speed of rotation between these two regions. Many astronomers think this difference is responsible for generating most of the magnetic field in the Sun by causing magnetic fields along the border between the convection zone and the core to wind up and strengthen. Since stars rotate more slowly as they age, this also plays a role in how the magnetic field of such stars weakens with time.

“In some ways you can think of the inside of a star as an incredibly complicated dance with many, many dancers,” said co-author Jeremy Drake of the Harvard-Smithsonian Center for Astrophysics in Cambridge, Mass. “Some dancers move with each other while others move independently. This motion generates magnetic field, but how it works in detail is extremely challenging to determine.”

For stars much less massive than the Sun, convection occurs all the way into the core of the star. This means the boundary between regions with and without convection, thought to be crucial for generating magnetic field in the Sun, does not exist. One school of thought has been that magnetic field is generated mostly by convection in such stars. Since convection does not change as a star ages, their magnetic fields would not weaken much over time.

By studying four of these low-mass red dwarf stars in X-rays, Wright and Drake were able to test this hypothesis. They used NASA’s Chandra X-ray Observatory to study two of the stars and data from the ROSAT satellite to look at two others.

“We found that these smaller stars have magnetic fields that decrease as they age, exactly as it does in stars like our Sun,” said Wright. “This really goes against what we would have expected.”

These results imply that the interaction along the convection zone-core boundary does not dominate the generation of magnetic field in stars like our Sun, since the low mass stars studied by Wright and Drake lack such a region and yet their magnetic properties are very similar.