Right now, astronomers are viewing a ball of hot gas billions of light years away that is radiating the energy of hundreds of billions of suns. At its heart is an object a little larger than 10 miles across. 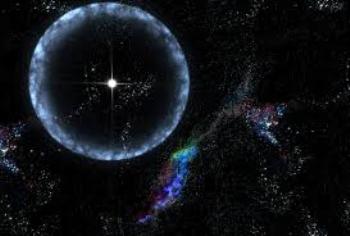 And astronomers are not entirely sure what it is.

If, as they suspect, the gas ball is the result of a supernova, then it’s the most powerful supernova ever seen.

In this week’s issue of the journal Science, they report that the object at the center could be a very rare type of star called a magnetar–but one so powerful that it pushes the energy limits allowed by physics.

An international team of professional and amateur astronomers spotted the possible supernova, now called ASASSN-15lh, when it first flared to life in June 2015.

Even in a discipline that regularly uses gigantic numbers to express size or distance, the case of this small but powerful mystery object in the center of the gas ball is so extreme that the team’s co-principal investigator, Krzysztof Stanek of The Ohio State University, turned to the movie This is Spinal Tap to find a way to describe it.

“If it really is a magnetar, it’s as if nature took everything we know about magnetars and turned it up to 11,” Stanek said. (For those not familiar with the comedy, the statement basically translates to “11 on a scale of 1 to 10.”)

The gas ball surrounding the object can’t be seen with the naked eye, because it’s 3.8 billion light years away. But it was spotted by the All Sky Automated Survey for Supernovae (ASAS-SN, pronounced “assassin”) collaboration. Led by Ohio State, the project uses a cadre of small telescopes around the world to detect bright objects in our local universe.

Though ASAS-SN has discovered some 250 supernovae since the collaboration began in 2014, the explosion that powered ASASSN-15lh stands out for its sheer magnitude. It is 200 times more powerful than the average supernova, 570 billion times brighter than our sun, and 20 times brighter than all the stars in our Milky Way Galaxy combined.

“We have to ask, how is that even possible?” said Stanek, professor of astronomy at Ohio State. “It takes a lot of energy to shine that bright, and that energy has to come from somewhere.”

“The honest answer is at this point that we do not know what could be the power source for ASASSN-15lh,” said Subo Dong, lead author of the Science paper and a Youth Qianren Research Professor of astronomy at the Kavli Institute for Astronomy and Astrophysics at Peking University.

He added that the discovery “may lead to new thinking and new observations of the whole class of superluminous supernova.”

Todd Thompson, professor of astronomy at Ohio State, offered one possible explanation. The supernova could have spawned an extremely rare type of star called a millisecond magnetar, a rapidly spinning and very dense star with a very strong magnetic field.

To shine so bright, this particular magnetar would also have to spin at least 1,000 times a second, and convert all that rotational energy to light with nearly 100 percent efficiency, Thompson explained. It would be the most extreme example of a magnetar that scientists believe to be physically possible.

“Given those constraints,” he said, “will we ever see anything more luminous than this? If it truly is a magnetar, then the answer is basically no.”

The Hubble Space Telescope will help settle the question later this year, in part because it will allow astronomers to see the host galaxy surrounding the object. If the team finds that the object lies in the very center of a large galaxy, then perhaps it’s not a magnetar at all, and the gas around it is not evidence of a supernova, but instead some unusual nuclear activity around a supermassive black hole.

If so, then its bright light could herald a completely new kind of event, said study co-author Christopher Kochanek, professor of astronomy at Ohio State and the Ohio Eminent Scholar in Observational Cosmology. It would be something never before seen in the center of a galaxy.

Ohio State co-authors on the study include John Beacom, professor of physics and astronomy and director of the university’s Center for Cosmology and Astro-Particle Physics (CCAPP); graduate students Thomas Holoien, Jonathan Brown, A. Bianca Danilet and Gregory Simonian; and Ohio State alumni Ben Shappee, now at the Carnegie Observatories, and Jose Prieto, now at the Universidad Diego Portales and Millennium Institute of Astrophysics.