Ireland could be hit by a strong Atlantic storm later this week with winds of up to 150 kilometres an hour. 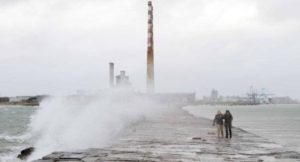 Met Éireann says there is the potential for a named storm coming close to Ireland on Thursday night and into Friday morning – and it would be called Callum.

A yellow rainfall warning for Donegal, Mayo and Sligo is currently in place with 25 to 40 millimetres of rain expected to fall.

“There’s a lot of uncertainty in it but on Friday morning, it looks like a storm on the Atlantic is going to bring a lot of windy weather over,” he said.

“I’m not sure yet if it’s going to be named but, at the moment, it looks like the west coast will be worst affected.”

Meanwhile, it will be largely dry today for most except Ulster and north-west Connacht, where there will be rain that could be heavy at times.

Elsewhere there will be sunny spells and variable amounts of cloud, with a moderate to brisk south-westerly wind.