Australian scientists have helped shed new light on volcanic eruptions, using Hawaii’s months-long Kilauea disaster which destroyed hundreds of homes. After analysing the eruption on Hawaii’s Big Island beginning in May 2018, researchers from France, the UK, US and Tasmania say changes in the speed of vibrations travelling through a volcano could be used to pinpoint its imminent eruption. 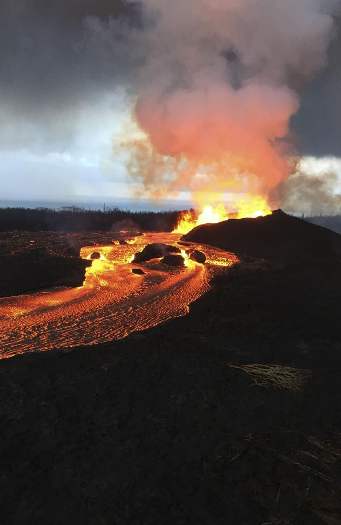 Ten days before the eruption of Kilauea, the University of Tasmania’s Gerrit Olivier says he and his colleagues found these vibrations inside the volcano’s magma chamber changed dramatically.

“The volcano is constantly bulging and contracting as the pressure inside the magma chamber changes,” Dr Oliver said.

“The behaviour of the seismic wave speeds are initially quite predictable.

“When the volcano bulges, the speed at which the vibrations travel through the volcano increase slightly as material is compressed. On the other hand, when the volcano contracts these wave speeds decrease.”

Days before the May 3 eruption, Kilauea was still bulging because of a build-up of pressure, but the vibrations stopped speeding up and instead slowed right down.

“This is a good indicator that the volcano isn’t able to sustain the pressure inside the magma chamber anymore, that the bulge is too big and it starts breaking the material around the magma chamber which ultimately leads to the eruption,” Dr Oliver said.

These changes have been recorded before, but the study said it was the first time it showed them occurring because of a weakening of material inside the volcano just before an eruption.

Dr Oliver and his colleagues hope this method could be used to help predict when other volcanoes will erupt, after Kilauea spewed out 800 million cubic metres of lava destroying more than 700 homes.