Tübingen neuroscientists have succeeded in activating dormant memory cells in rats. Using weak electrical impulses targeted at previously inactive cells in the hippocampus, the researchers induced the cells to recognize the exact place where the impulse had been first administered. In rodents as well as humans, the hippocampus is the brain area responsible for memory. Therefore, the new study by researchers of the Werner Reichardt Centre for Integrative Neuroscience (CIN) at the University of Tübingen offers insight into the question of how memories are formed within our brains. Their findings are published in Current Biology. 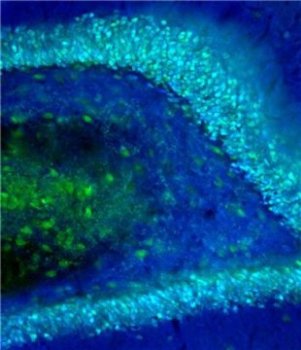 Memory is one of the most important functions of our brain. Not only does it allow us to regale our grandchildren with the exploits of our youth; it is essential for many everyday procedures. Our memory is constantly and immediately active whenever we experience a new thing. For instance, after meeting somebody only once, we still recognise them after hours or days. And even when we go somewhere for the first time — for instance, the perfume section of a department store, a particular office in a building, or the toilet in a restaurant — we will usually be able to find our way to the exit without a problem.

So our memory is not only constantly alert, it also constructs new recollections very quickly — often during the first interaction. The reason for this alacrity of memory formation is the fact that for every person, every place — and probably a lot of other concepts, too — there are individual memory cells that are specifically assigned to that memory. One subtype of these neurons called granule cells is situated in the hippocampus, a centrally located brain area. Whenever memory concepts like “my living room” or “Angela Merkel” are activated — e.g. by stepping into the living room or by seeing a photo of the German chancellor — the small number of granule cells associated with that memory become activated in the form of electrical discharges. The large majority of the remaining neurons, however, remain dormant.

Up to now, the mechanisms through which individual granule cells are assigned to specific memories were not understood. The question of whether ‘silent’ granule cells can become activated under certain circumstances proved particularly intriguing. The Tübingen research team led by Dr. Andrea Burgalossi worked on the assumption that granule cells which receive electrical impulses can be ‘un-silenced’ and thus become memory cells. To confirm their hypothesis, they inserted hair-thin microelectrodes into the dentate gyrus of rats — an area within the hippocampus which is responsible for memories of space and location — allowing them to send weak electrical impulses to individual granule cells.

The rats were allowed to explore a simple labyrinth, and at a specific location within this labyrinth, individual granule cells were stimulated with weak electrical pulses (in the nanoampere range) via the microelectrode. The same electrode allowed the researchers to measure the subsequent activity of the stimulated cells. The result: whenever the rats arrived at the same spot within the labyrinth where the original impulse had been administered, stimulated granule cells now fired spontaneously. The electrical impulse had thus induced the individual granule cells to form a place memory.

Moreover, Dr. Burgalossi and his team found that the duration and temporal pattern of the impulses administered play a large role. The impulses formed more durable place memories when they followed the natural theta-rhythm of the brain — a periodic increase and decrease in electrical potential which takes place roughly 4 to 12 times per second. Another finding could turn out to be of equal importance: rats that were new to the labyrinth reacted much more keenly to the induced place memory than rats that had been given the run of the labyrinth beforehand. Apparently, memory cells can be activated more easily when the brain is exposed to novel information.

These new insights into memory formation shed light on one of the most important functions of the human brain. And though there is still much to do before fundamental findings like these can offer new strategies for the treatment of brain diseases which affect memory formation (e.g. Alzheimer’s disease, Parkinson, dementia), they represent an indispensable first step on the way.