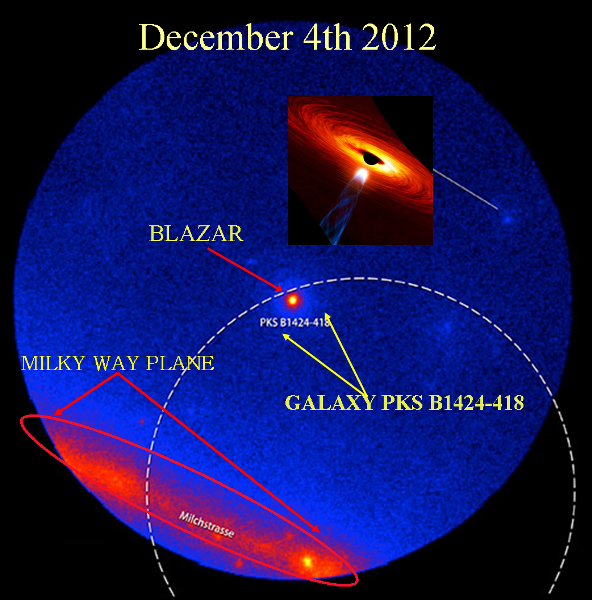 Starting in the summer of 2012, NASA’s Fermi satellite witnessed a dramatic brightening of PKS B1424-418, an active galaxy classified as a gamma-ray blazar. An active galaxy is an otherwise typical galaxy with a compact and unusually bright core. The excess luminosity of the central region is produced by matter falling toward a supermassive black hole weighing millions of times the mass of our Sun. As it approaches the black hole, some of the material becomes channeled into particle jets moving outward in opposite directions at nearly the speed of light. In blazars one of these jets happens to point almost directly toward Earth. 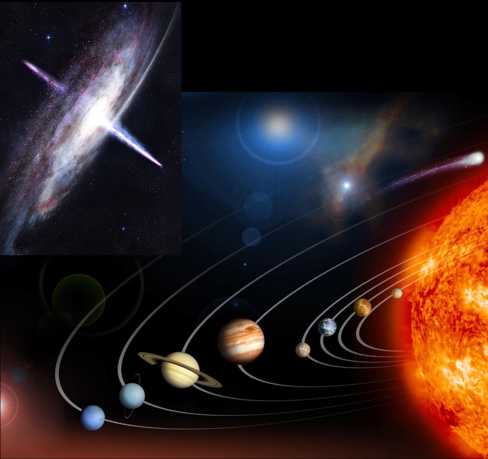 “Within their jets, blazars are capable of accelerating protons to relativistic energies. Interactions of these protons with light in the central regions of the blazar can create pions. When these pions decay, both gamma rays and neutrinos are produced,” explains Karl Mannheim, a coauthor of the study and astronomy professor in Würzburg, Germany. “We combed through the field where Big Bird must have originated looking for astrophysical objects capable of producing high-energy particles and light,” adds coauthor Felicia Kraub from the University of Erlangen-Nürnberg in Germany.

In published report, the team suggests the PKS B1424-418 outburst and Big Bird are linked, calculating only a 5-percent probability the two events occurred by chance alone. Using data from Fermi, NASA’s Swift and WISE satellites, the LBA and other facilities, the researchers determined how the energy of the eruption was distributed across the electromagnetic spectrum and showed that it was sufficiently powerful to produce a neutrino at PeV energies.