The worst fears of flooding have been realized with Harvey. Close to three feet of rain has already fallen in Southeast Texas, and there’s still more to come. It’s the most extreme rainfall the region has ever witnessed. 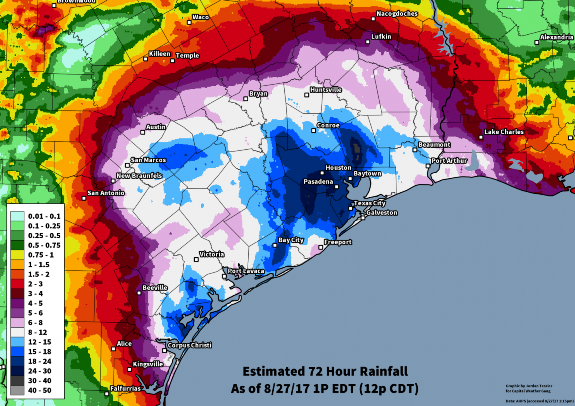 “Catastrophic flooding in the Houston metropolitan area is expected to worsen,” said Patrick Blood of the National Weather Service on Sunday. It added: “This event is unprecedented and all impacts are unknown and beyond anything experienced.”

On Sunday evening, brand new bands of torrential rain were forming southwest of Houston and appeared on-track to strike the city overnight. Rainfall rates will almost certainly exceed three inches per hour over the already-submerged city. That threat prompted the National Weather Service to re-issue the flash flood emergency  –  the strongest flood warning it can issue  –  in effect through around 1 a.m. Central Time.

Two-day rainfall totals have reached or exceeded 20 inches across the entire Houston metro area. Some locations are approaching 30 inches. The swift inundation of water has turned rivers, bayous and streams into lakes – including those that run through the city of Houston itself.

“I know for a fact this is the worst flood Houston has ever experienced,” Patrick Blood, Weather Service meteorologist, told the Houston Chronicle.

The Weather Service said this August had become Houston’s wettest month in recorded history due to the storm. At the Weather Service office serving Houston in Dickinson, Tex. 24.1 inches of rain fell 24 hours.

The Weather Service said the “majority” of rivers and bayous around Houston were at record levels. Some were exceeding previous records by 10 feet.

Rainfall from Harvey in Harris County, the third most populous in the country and home to Houston, had exceeded the amount from Tropical Storm Allison, in half the amount of time (two to three days, rather than five, the Weather Service said Sunday afternoon. Prior to Harvey, Tropical Storm Allison was considered the worst flood on record in the Houston region.

The onslaught will continue into the week. Harvey is forecast to remain parked over Southeast Texas through at least Tuesday, pummeling the region with more rain bands .

The National Weather Service Weather Prediction Center is calling for an additional 15 to 25 inches of rain over the middle and upper Texas coast, including the Houston area, during the next several days. The National Hurricane Center said isolated storm rainfall totals could reach 50 inches, which would rival some of the most extreme rain events in U.S. history and break the state rainfall record in Texas.

A relentless band of heavy rain sat nearly stationary over Houston and its surrounding suburbs Saturday night. By Sunday morning, the effects of hour after hour of drenching rainfall started to take their toll, with widespread reports of high water on roadways. Bands of heavy rain continued to pivot through the Houston area Sunday afternoon but became somewhat more intermittent.

The National Weather Service did not mince words about the danger of this unprecedented situation. The office issued multiple flash-flood emergencies, which extended into Sunday evening, shattering the precedent for issuance of such warnings locally.

At least five deaths have already been blamed on the storm, and over 1,000 water rescues have taken place in the Houston area as of Sunday afternoon. Local officials are pleading with the general public to not travel and to make sure they access their roof if the water rises too high in their homes rather than shelter in their attic.

“This disaster’s going to be a landmark event,” Brock Long, FEMA administrator, said on CNN’s “State of the Union” program. “This is a storm that the United States has not seen yet.”

So much rain has fallen that is has been extremely hard for first responders to keep up with the growing onslaught of rescue requests.

“We are facing a catastrophic multi-billion-dollar loss,” tweeted Steve Bowen, a meteorologist at Reinsurer Aon Benfield.

Perhaps even more frightening, computer model forecasts are showing the very real possibility that Harvey will move back over the Gulf of Mexico Monday night and Tuesday, when it could re-strengthen modestly. It may make a second landfall near Houston on Wednesday, with rain continuing into Thursday and even Friday.

In addition to the heavy rain, embedded thunderstorms have spawned more than a dozen tornadoes across the region, adding to the list of hazards brought on by Harvey. In fact, the Weather Service had issued more tornado warnings on (each of) Friday, Saturday, and Sunday than on any previous single day on record, for a total of 123 warnings.

This storm is unfortunately breaking all the wrong precedents. Things will only continue to get worse over the next 24 to 48 hours as more areas of the region receive overwhelming amounts of water with nowhere for it to go.