The quake was centered near the town of Guiria, which is approximately 80km from Port of Spain, Trinidad and Tobago’s capital city. Shaking was felt across the region, including some islands in the Caribbean, according to the USGS. Tremors were felt 286 miles (622 km) away in the capital of Caracas.

There are no current tsunami advisories at the present time. This is the strongest earthquake to occur in this part of the Caribbean since a magnitude 7.4 earthquake shook the Martinique region of the Windward Islands on Nov. 29, 2007.

Just Two Day Ago 8.2 Quake Hits Off Coast of Fiji

A deep, undersea earthquake with a preliminary magnitude of 8.2 has struck Fiji and small tsunami waves have been observed but no damage reported. No casualties are expected based on initial readings. 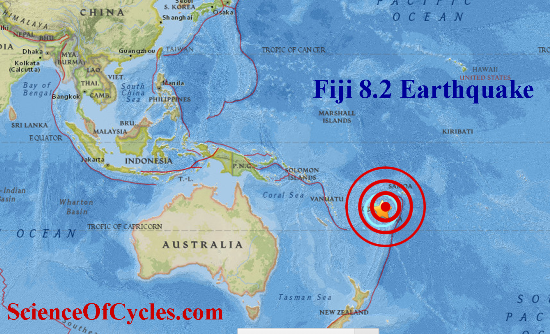 The U.S. Geological Survey says the quake hit at a depth of 348 miles and was located 174 miles northeast of Fiji’s Ndoi Island. The Pacific Tsunami Warning Center says small tsunami waves have been observed.

Coming Next in Part III….The FAA (Federal Aviation Administration) is the biggest player forcing this to the front. Real and hard hitting data covering the better part of a decade, provides a daunting picture of commercial airline operatives such as pilots, attendants and frequent flyers traveling at altitudes of 35,000 feet or above.​