This new research may be the most hard-hitting conformation of my 15 years of research – initially providing evidence of the Sun-Earth connection and Earth’s weather, then later in my studies adding evidence of a Galaxy-Sun-Earth connection. This research has been well documented in my books “Solar Rain” 2005 and “Global Warming Disguise” 2007. Further research is currently documented in my third book (in progress) providing evidence of long-term cyclical events highlighting the reduction of Earth’s magnetic field and the pathway to a full magnetic reversal.

I wish to present a brief thank you to all those who have supported my work over the years; and perhaps more importantly, the support of my cause. Forward looking research comes with a challenging task to stay focused – provide substantial evidence which can survive peer review –  and the support of people like you who continuously encouraged me to “stay with it”. Without you, I would have been just another person with great ideas. 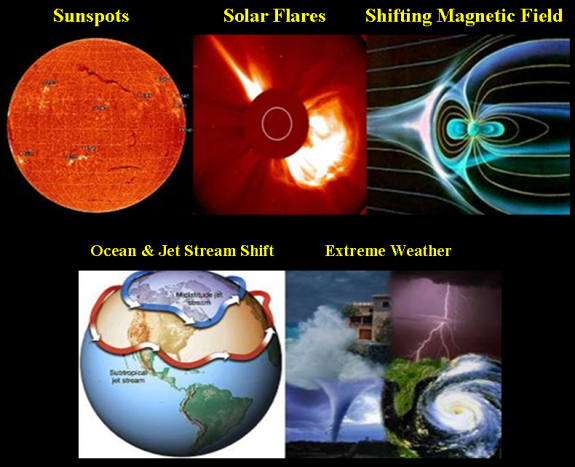 Scientists have discovered new evidence showing high-speed solar wind streams can increase extreme weather down on Earth. Researchers from Reading University Department of Meteorology – have discovered evidence that extreme weather events are triggered by charged particles from the Sun in addition to galactic cosmic rays from our galaxy “Milky Way”.

“Cosmic rays, tiny particles from across the Universe accelerated close to the speed of light, have been thought to play a role in weather down on Earth” says Lead author of the study, Dr Chris Scott.  This new finding goes beyond the well acknowledged interplay of GCR’s (galactic cosmic rays) influence on Earth’s atmosphere. “We have provided new evidence that charged particles emitted from our Sun also has a major role in Earth’s weather.”

The results of these new findings, which were published in the scientific journal Institute of Physics Environmental Research, could prove crucial for weather forecasters since solar wind streams rotate with the Sun at regular intervals which accelerate charged particles into Earth’s atmosphere. These streams can be tracked by spacecraft offering the potential for predicting the severity of hazardous weather events on Earth many weeks in advance.

Professor Giles Harrison, head of Reading’s Department of Meteorology and co-author of the ERL article, said: “In increasing our understanding of weather on Earth we are learning more about its important links with space weather. Bringing the topics of Earth Weather and Space Weather ever closer requires more collaborations between atmospheric and space scientists, in which the University of Reading is already leading the way.”

“As the Sun rotates every 27 days these high-speed streams of particles wash past our planet with predictable regularity. Such information could prove useful when producing long-range weather forecasts.”

Your assistance has always been at the core of this model, without you we fail. Science Of Cycles keeps you tuned-in and knowledgeable of what we are discovering, and how some of these changes will affect our communities and ways of living. We are maintaining an an open-ended donation of any amount you choose.  **Click on the banner below to begin this simple process.      Cheers, Mitch