A powerful storm that began its journey Sunday in California will roar across the country over the next two to three days, spreading heavy snow, torrential rain and crippling ice to more than 200 million Americans. 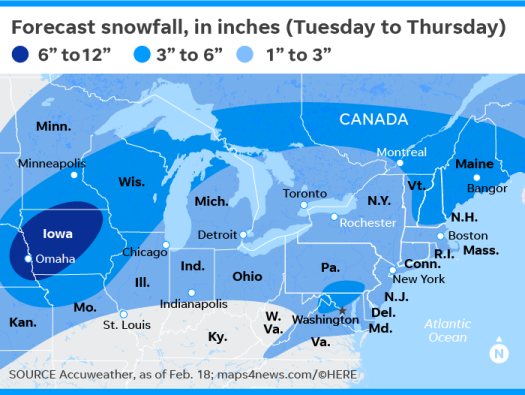 That’s about 60 percent of the population, AccuWeather said. “Parts of 39 of the 48 contiguous United States will be touched by the massive storm, including every state east of the Mississippi River,” AccuWeather meteorologist Faith Eherts said.

On Monday, the storm aimed its fury on the southern Rockies. As much as a foot of snow fell in Arizona, Colorado and New Mexico.

By Tuesday, the storm will spread heavy snow and strong winds into the central U.S., the National Weather Service said.

Late Tuesday and into Wednesday, the threat for heavy snow, ice and dangerous travel will expand across the Midwest, Ohio Valley, Mid Atlantic and the Northeast.

The Weather Channel warned that the Washington D.C., Baltimore and Philadelphia metro areas will see accumulating snow to start before it changes to a mix of sleet, freezing rain and then rain. That could make the Wednesday morning commute in those cities hazardous.

Freezing rain and ice will be especially dangerous in the mountains of West Virginia, Virginia and North Carolina, weather.com said, causing tree damage and scattered power outages. Lighter amounts of ice are forecast for portions of Indiana, Ohio and Pennsylvania.

In the South, several rounds of heavy, flooding rainfall and even some severe thunderstorms are expected Tuesday and Wednesday.

Up to a half foot of rain could swamp much of northern Mississippi, northern Alabama and Tennessee, where flood watches and warnings have been posted.

Summer will continue to pay an early visit to Florida on Tuesday as temperatures soar into the 80s. Several Florida cities set record highs Monday, including Vero Beach, which tied an all-time February record high of 89 degrees.

The unusual warmth is expected to continue in the Sunshine State for most of the week.