Scientists claim to have solved a longstanding mystery as to how cosmic dust, the building blocks of stars and planets, forms across the Universe. 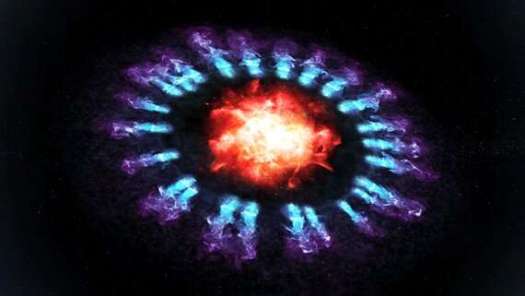 Cosmic dust contains tiny fragments or organic material and is spread out across the Universe. The dust is primarily formed in stars and is then blown off in a slow wind or a massive star explosion.

Up until now, astronomers have had little understanding as to why so much cosmic dust exists in the interstellar medium, with theoretical estimates suggesting it should be obliterated by supernova explosions.

A supernova is an event that occurs upon the violent death of a star and is one of the most powerful events in the Universe, producing a shockwave which destroys almost anything in its path.

Yet new research published in the Monthly Notices of the Royal Astronomical Society has observed the survival of cosmic dust around the closest supernova explosion detected to us, Supernova 1987A.

Observations using NASA’s research aircraft, the Stratospheric Observatory for Infrared Astronomy (SOFIA), have detected cosmic dust in a distinctive set of rings that form part of Supernova 1987A.

The results seem to suggest that there is rapid growth of cosmic dust within the rings, leading the team to believe that dust may actually be re-forming after it is destroyed in the wake of a supernova blast wave.

This immediacy – that the post-shock environment might be ready to form or re-form dust – had never been considered before, and may be pivotal in fully understanding how cosmic dust is both created and destroyed.

“We already knew about the slow-moving dust in the heart of 1987A,” said Dr. Mikako Matsuura, lead author on the paper from the School of Physics and Astronomy.

“It formed from the heavy elements created in the core of the dead star. But the SOFIA observations tell us something completely new.”

Cosmic dust particles can be heated from tens to hundreds of degrees causing them to glow at both infrared and millimeter wavelengths. Observations of millimeter-wave dust emission can generally be carried out from the ground using telescopes; however, observations in the infrared are almost impossible to interference from the water and carbon dioxide in the Earth’s atmosphere.

By flying above most of the obscuring molecules, SOFIA provides access to portions of the infrared spectrum not available from the ground.