Galaxies and dark matter go together like peanut butter and jelly. You typically don’t find one without the other. 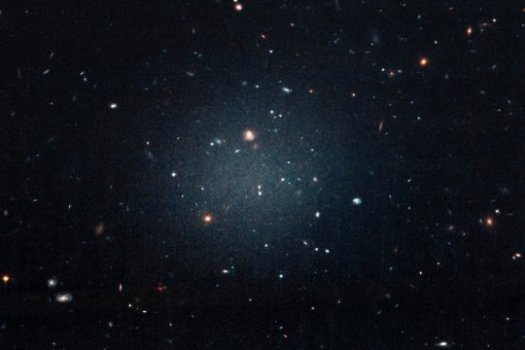 Therefore, researchers were surprised when they uncovered a galaxy that is missing most, if not all, of its dark matter. An invisible substance, dark matter is the underlying scaffolding upon which galaxies are built. It’s the glue that holds the visible matter in galaxies — stars and gas — together.

“We thought that every galaxy had dark matter and that dark matter is how a galaxy begins,” said Pieter van Dokkum of Yale University in New Haven, Connecticut, lead researcher of the Hubble observations. “This invisible, mysterious substance is the most dominant aspect of any galaxy. So finding a galaxy without it is unexpected. It challenges the standard ideas of how we think galaxies work, and it shows that dark matter is real: it has its own separate existence apart from other components of galaxies. This result also suggests that there may be more than one way to form a galaxy.”

The unique galaxy, called NGC 1052-DF2, contains at most 1/400th the amount of dark matter that astronomers had expected. The galaxy is as large as our Milky Way, but it had escaped attention because it contains only 1/200th the number of stars. Given the object’s large size and faint appearance, astronomers classify NGC 1052-DF2 as an ultra-diffuse galaxy. A 2015 survey of the Coma galaxy cluster showed these large, faint objects to be surprisingly common.

But none of the ultra-diffuse galaxies discovered so far have been found to be lacking in dark matter. So even among this unusual class of galaxy, NGC 1052-DF2 is an oddball.

Van Dokkum and his team spotted the galaxy with the Dragonfly Telephoto Array, a custom-built telescope in New Mexico they designed to find these ghostly galaxies. They then used the W.M. Keck Observatory in Hawaii to measure the motions of 10 giant groupings of stars called globular clusters in the galaxy. Keck revealed that the globular clusters were moving at relatively low speeds, less than 23,000 miles per hour. Stars and clusters in the outskirts of galaxies containing dark matter move at least three times faster. From those measurements, the team calculated the galaxy’s mass. “If there is any dark matter at all, it’s very little,” van Dokkum explained. “The stars in the galaxy can account for all the mass, and there doesn’t seem to be any room for dark matter.”

The researchers next used NASA’s Hubble Space Telescope and the Gemini Observatory in Hawaii to uncover more details about the unique galaxy. Gemini revealed that the galaxy does not show signs of an interaction with another galaxy. Hubble helped them better identify the globular clusters and measure an accurate distance to the galaxy.

The Hubble images also revealed the galaxy’s unusual appearance. “I spent an hour just staring at the Hubble image,” van Dokkum recalled. “It’s so rare, particularly these days after so many years of Hubble, that you get an image of something and you say, ‘I’ve never seen that before.’ This thing is astonishing: a gigantic blob that you can look through. It’s so sparse that you see all of the galaxies behind it. It is literally a see-through galaxy.”

The ghostly galaxy doesn’t have a noticeable central region, or even spiral arms and a disk, typical features of a spiral galaxy. But it doesn’t look like an elliptical galaxy, either. The galaxy also shows no evidence that it houses a central black hole. Based on the colors of its globular clusters, the galaxy is about 10 billion years old. Even the globular clusters are oddballs: they are twice as large as typical stellar groupings seen in other galaxies.

“It’s like you take a galaxy and you only have the stellar halo and globular clusters, and it somehow forgot to make everything else,” van Dokkum said. “There is no theory that predicted these types of galaxies. The galaxy is a complete mystery, as everything about it is strange. How you actually go about forming one of these things is completely unknown.”

But the researchers do have some ideas. NGC 1052-DF2 resides about 65 million light-years away in a collection of galaxies that is dominated by the giant elliptical galaxy NGC 1052. Galaxy formation is turbulent and violent, and van Dokkum suggests that the growth of the fledgling massive galaxy billions of years ago perhaps played a role in NGC 1052-DF2’s dark-matter deficiency.

Another idea is that gas moving toward the giant elliptical NGC 1052 may have fragmented and formed NGC 1052-DF2. The formation of NGC 1052-DF2 may have been helped by powerful winds emanating from the young black hole that was growing in the center of NGC 1052. These possibilities are speculative, however, and don’t explain all of the characteristics of the observed galaxy, the researchers said.

The team is already hunting for more dark-matter deficient galaxies. They are analyzing Hubble images of 23 other diffuse galaxies. Three of them appear similar to NGC 1052-DF2.

“Every galaxy we knew about before has dark matter, and they all fall in familiar categories like spiral or elliptical galaxies,” van Dokkum said. “But what would you get if there were no dark matter at all? Maybe this is what you would get.”