A volcano in Indonesia known as the “Child of Krakatoa” erupted over 50 times in a single day, according to meteorologists and geophysics experts. 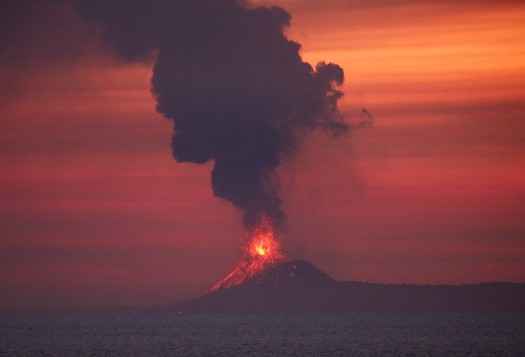 Staff at MAGMA Indonesia (Multiplatform Application for Geohazard Mitigation and Assessment in Indonesia) noted in a Sept. 23 statement that Mount Anak Krakatau, or “Child of Krakatoa,” erupted 56 times on Sept. 22, spewing lava and ejecting dark smoke.

“Crater smoke is thin white to gray, with a thin to thick intensity, reaching a height of 1000 meters (3280 ft). A total of 56 eruptions with a height of 200-300 m (656-985 ft) have been observed, along with black smoke. Night-time footage from CCTV showed lava flares and incandescent flow.”

Thunderous sounds and weak tremors accompanied the eruption, MAGMA Indonesia stated, adding that tourists and other people were prohibited from approaching the crater within a 2 km (1.2 miles) radius.

The Japanese helicopter carrier JS Kaga, encountered the volcano, known for its deadly 1883 eruption, after the ship’s departure from Indonesia’s capital Jakarta.

Reuters captured one of Anak Krakatau’s eruptions on camera on Sept. 22, as it catapulted molten lava into the air.

Observers at the Center for Volcanology and Geological Hazard Mitigation (CVGHM) said in a Volcano Observatory Notice for Aviation (VONA) that the volcano posed a level II (CAUTION) threat.

“Current Aviation Color Code: ORANGE, Eruption with ash clouds at 22:48 UTC (05:48 local time). The eruption lasted for 115 seconds. Eruption and ash emission is continuing. Ash-cloud moving to south. Best estimate of ash-cloud top is around 1722 FT (538 M) above sea level, may be higher than what can be observed clearly. Source of height data: ground observer.”

The eruption has not caused any disruptions to flights.

Indonesia’s National Agency for Disaster Countermeasure (BNPB) said in context of a previous Krakatau eruption that “this is an opportunity for volcano tourism and education—not all countries have volcanoes. Indonesia has 127 active volcanoes, or 13% of active volcanoes in the world.”

MAGMA Indonesia said that Anak Krakatau has experienced an increase in volcanic activity since June.

Lying on the Sunda Straits between Java and Sumatra islands, the original volcanic island Krakatau claimed more than 35,000 lives in a deadly eruption in 1883. The highly active Anak Krakatau, is a new island formed in the same location by an underwater eruption in 1927.