A deadly storm system was bearing down on the East Coast and parts of the Midwest. The storm has already left a violent swath of eath and destruction across parts of the South this weekend, with at least eight people killed as of late Sunday. 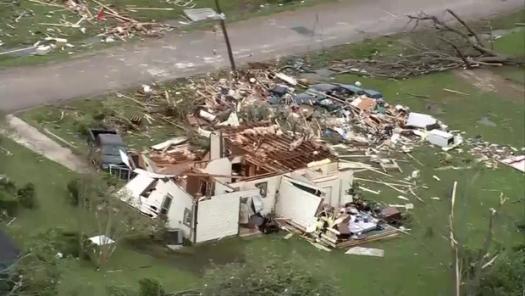 The storm surge has been made up of a mix of strong winds, heavy rain, flooding and even tornadoes. At least 11 tornadoes have touched down in three different states as a result of a stronger-than-usual storm system. Mississippi Gov. Phil Bryant signed a declaration of emergency Sunday. Dozens of homes in Hamilton, Mississippi, have been completely leveled.

Saturday was a particularly destructive day for the storm. More than 100,000 people were left without power once the storm hit Texas, Louisiana and Mississippi.

Now the storm turns toward the Midwest and East Coast. Tornado warnings have been issued in Ohio and South Carolina on Sunday afternoon and a tornado watch has been issued in Virginia.