Tens of millions of Americans are feeling the deep freeze left behind by a deadly weekend winter storm that swept through the Midwest and Northeast. More than a quarter of the country woke up to temperatures below 10 degrees Monday, reports CBS News correspondent Omar Villafranca from Killington, Vermont, where the wind chill was minus-31 degrees. 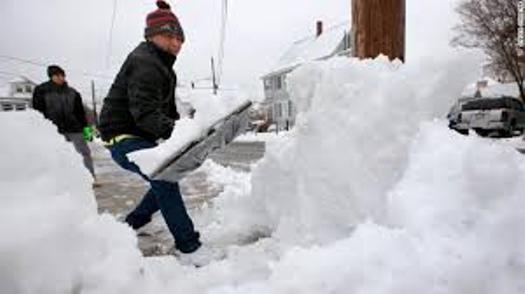 At least 3 deaths are blamed on the severe weather.

The storm also caused headaches for millions of air travelers across the U.S., with thousands of flight cancellations and delays.

Upstate New York got as much as 20 inches of snow. Parts of Ohio and Pennsylvania got up to 18 inches.

The storm buried parts of the Northeast in snow and ice. The Hudson River froze over in upstate New York.

People in Glens Falls, New York, near the Vermont border, spent Sunday digging out from more than a foot-and-a-half of snow, and plows could barely keep up with whiteout conditions on Interstate 87.

In Gray, Maine, residents raced to clear around 8 inches of snow before the Arctic temperatures froze everything. Resident Len Sherwood explained the way to do it is to “do a little bit at a time, go back in warm up, come back out later.”

Connecticut Gov. Ned Lamont said, “What we’re particularly worried about is the icy conditions and what that means to the electric grid.”

The snow, sleet and freezing rain knocked out power to more than 20,000 homes and businesses in Connecticut and New York.

A utility worker in Connecticut was killed Sunday when a tree fell on him while he was trying to restore service.

The storm was deadly from its onset. In Kansas, a snow plow driver died Saturday morning when his vehicle rolled off the road. And it created a scare in Chicago when a United Airlines jet slid off the icy runway after landing at O’Hare Airport.

“Next thing you know we were off the runway and stuck in snow…we ended up sitting on the plane for another hour,” one passenger said.

In Missouri, slick surfaces triggered a 15 car pileup crash on Interstate 55, shutting down the road for hours.

The effects of the storm reached as far south as Alabama, where at least six people were hurt in an apparent EF-2 tornado. Winds topping 135 miles an hour significantly damaged several buildings outside Montgomery.

For those who have to venture out into the bitter cold, the advice is the same whether you’re here skiing or just walking your dog: Dress in layers, stay hydrated, and take frequent breaks inside — because it can take less than 15 minutes for frostbite to set in.