Water is the key to life on Earth. Scientists continue to unravel the mystery of life on Mars by investigating evidence of water in the planet’s soil. Previous observations of soil observed along crater slopes on Mars showed a significant amount of perchlorate salts, which tend to be associated with brines with a moderate pH level. 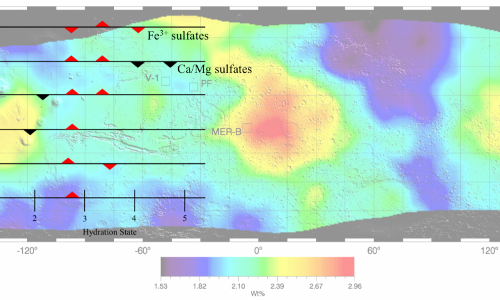 However, researchers have stepped back to look at the bigger picture through data collected from the 2001: Mars Odyssey, named in reference to the science fiction novel by Arthur C. Clarke, “2001: A Space Odyssey,” and found a different chemical on Mars may be key. The researchers found that the bulk soil on Mars, across regional scales the size of the U.S. or larger, likely contains iron sulfates bearing chemically bound water, which typically result in acidic brines. This new observation suggests that iron sulfates may play a major role in hydrating martian soil.

This finding was made from data collected by the 2001: Mars Odyssey Gamma Ray Spectrometer, or GRS, which is sensitive enough to detect the composition of Mars soil up to one-half meter deep. This is generally deeper than other missions either on the ground or in orbit, and it informs the nature of bulk soil on Mars. This research was published recently in the Journal of Geophysical Research: Planets.

“This is exciting because it’s contributing to the story of water on Mars, which we’ve used as a path for our search for life on Mars,” said Nicole Button, LSU Department of Geology and Geophysics doctoral candidate and co-author in this study.

The authors expanded on previous work, which explored the chemical association of water with sulfur on Mars globally. They also characterized how, based on the association between hydrogen and sulfur, the soil hydration changes at finer regional scales. The study revealed that the older ancient southern hemisphere is more likely to contain chemically bound water while the sulfates and any chemically bound water are unlikely to be associated in the northerly regions of Mars.

The signature of strong association is strengthened in the southern hemisphere relative to previous work, even though sulfates become less hydrated heading southwards. In addition, the water concentration may affect the degree of sulfate hydration more than the sulfur concentration. Limited water availability in soil-atmosphere exchange and in any fluid movement from deeper soil layers could explain how salt hydration is water-limited on Mars. Differences in soil thickness, depth to any ground ice table, atmospheric circulation and sunshine may contribute to hemispheric differences in the progression of hydration along latitudes.

The researchers considered several existing hypotheses in the context of their overall observations, which suggest a meaningful presence of iron-sulfate rich soils, which are wet compared to Mars’ typically desiccated soil. This type of wet soil was uncovered serendipitously by the Spirit Rover while dragging a broken wheel across the soil in the Paso Robles area of Columbia Hills at Gusev Crater. Key hypotheses of the origin of this soil include hydrothermal activity generating sulfate-rich, hydrated deposits on early Mars similar to what is found along the flanks of active Hawaiian volcanoes on Earth.
Alternatively, efflorescence, which creates the odd salt deposits on basement walls on Earth, may have contributed trace amounts of iron-sulfates over geologic time. A third key hypothesis involves acidic aerosols released at volcanic sites, such as acid fog, dispersed throughout the atmosphere, and interacting subsequently with the finer components of soil as a source of widespread hydrated iron-sulfate salts.

Among these hypotheses, the researchers identify acid fog and hydrothermal processes as more consistent with their observations than efflorescence, even though the sensitivity of GRS to elements, but not minerals, prevents a decisive inference. Hydrothermal sites, in particular, are increasingly recognized as important places where the exchange between the surface and deep parts of Earth’s biosphere are possible. This hypothesis is significant to the question of martian habitability.

“Our story narrows it to two hypotheses, but emphasizes the significance of all of them,” said LSU Department of Geology and Geophysics Assistant Professor Suniti Karunatillake, who is a fellow lead author. “The depth and breadth of these observation methods tell us about global significance, which can inform the big question of what happened to the hydrologic cycle on Mars.”