An international research team including scientists from the Max Planck Institute for Radio Astronomy in Bonn, Germany used a combination of radio and optical telescopes to identify the precise location of a fast radio burst (FRB) in a distant galaxy, allowing them to conduct a unique census of the Universe’s matter content. 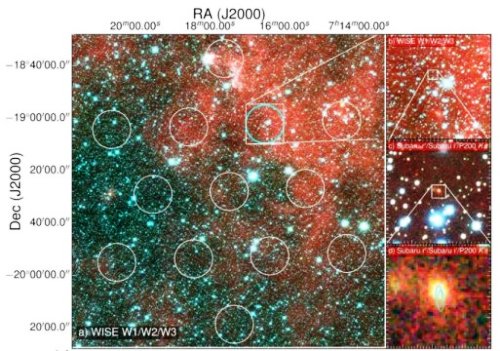 Their result, published in today’s edition of Nature, confirms current cosmological models of the distribution of matter in the Universe.

On April 18, 2015, a fast radio burst or FRB was detected by the 64-m Parkes radio telescope of the Commonwealth Scientific and Industrial Research Organisation (CSIRO) in Australia within the framework of the SUrvey for Pulsars and Extragalactic Radio Bursts (SUPERB) project. An international alert was triggered to follow it up with other telescopes and within a few hours, a number of telescopes around the world were looking for the signal, including CSIRO’s Australia Telescope Compact Array (ATCA) and the Effelsberg Radio Telescope in Germany.

FRBs are mysterious bright radio flashes generally lasting only a few milliseconds. Their origin is still unknown, with a long list of potential phenomena associated with them. FRBs are very difficult to detect; before this discovery only 16 had been detected.

“In the past FRBs have been found by sifting through data months or even years later. By that time it is too late to do follow up observations.” says Evan Keane, Project Scientist at the Square Kilometre Array Organisation and the lead scientist behind the study. To remedy this, the team developed their own observing system (SUPERB) to detect FRBs within seconds, and to immediately alert other telescopes, when there is still time to search for more evidence in the aftermath of the initial flash.

Thanks to the ATCA’s six 22-m dishes and their combined resolution, the team was able to pinpoint the location of the signal with much greater accuracy than has been possible in the past and detected a radio afterglow that lasted for around 6 days before fading away. This afterglow enabled them to pinpoint the location of the FRB about 1000 times more precisely than for previous events.

The puzzle still required another piece to be put in place. The team used the National Astronomical Observatory of Japan (NAOJ)’s 8.2-m Subaru optical telescope in Hawaii to look at where the signal came from, and identified an elliptical galaxy some 6 billion light years away. “It’s the first time we’ve been able to identify the host galaxy of an FRB” adds Evan Keane. The optical observation also gave them the redshift measurement (the speed at which the galaxy is moving away from us due to the accelerated expansion of the Universe), the first time a distance has been determined for an FRB.

For understanding the physics of such events it is important to know basic properties like the exact position, the distance of the source and whether it will be repeated. “Our analysis leads us to conclude that this new radio burst is not a repeater, but resulting from a cataclysmic event in that distant galaxy,” states Michael Kramer from the Max Planck Institute for Radio Astronomy (MPIfR) in Bonn, Germany who analysed the radio profile’s structure of the event. MPIfR’s Effelsberg Radio Telescope was also used for radio follow up observations after the alert.

FRBs show a frequency-dependent dispersion , a delay in the radio signal caused by how much material it has gone through. “Until now, the dispersion measure is all we had. By also having a distance we can now measure how dense the material is between the point of origin and Earth, and compare that with the current model of the distribution of matter in the Universe” explains Simon Johnston, co-author of the study, from CSIRO’s Astronomy and Space Science division. “Essentially this lets us weigh the Universe, or at least the normal matter it contains.”

In the current model, the Universe is believed to be made of 70% dark energy, 25% dark matter and 5% ‘ordinary’ matter, the matter that makes everything we see. However, through observations of stars, galaxies and hydrogen, astronomers have only been able to account for about half of the ordinary matter, the rest could not be seen directly and so has been referred to as ‘missing’.

“The good news is our observations and the model match, we have found the missing matter” explains Evan Keane. “It’s the first time a fast radio burst has been used to conduct a cosmological measurement.”

“This shows the potential for FRBs as new tools for cosmology,” concludes Michael Kramer who also worked on the calculation to weigh the missing matter. “Just think what we can do when we have discovered hundreds of these.”

Looking forward, the Square Kilometre Array, with its extreme sensitivity, resolution and wide field of view is expected to be able to detect many more FRBs and to pinpoint their host galaxies. A much larger sample will enable precision measurements of cosmological parameters such as the distribution of matter in the Universe, and provide a refined understanding of dark energy.