Scientists at the University of California, Riverside have detected spontaneous tectonic tremor—a signature of slow earthquakes deep below the earth’s surface—in the Anza Gap region of the San Jacinto Fault. Tectonic tremors are believed to increase the likelihood of a moderate to large, damaging earthquake occurring close to the earth’s surface by altering the stress along the fault. 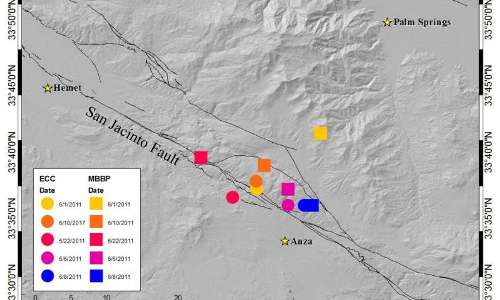 Abhijit Ghosh, an assistant professor of earth sciences in UCR’s College of Natural and Agricultural Sciences, and Alexandra Hutchinson, an earth sciences graduate student, published the research in the Bulletin of the Seismologic Society of America.

The paper is titled “Ambient Tectonic Tremor in the San Jacinto Fault, Near the Anza Gap, Detected by Multiple Mini Seismic Arrays.”

The San Jacinto Fault zone, which is part of the San Andreas Fault system, runs underneath densely populated areas of Inland Southern California, including San Bernardino, Redlands, and Moreno Valley. It is the most active fault in Southern California and sits five miles from the UCR campus. While it is technically not a plate boundary, the San Jacinto Fault accommodates some of the movement that occurs as the North American Plate and the Pacific Plate grind together at the San Andreas Fault.

Over the past 200 years, the 20-km region known as the Anza Gap is the only stretch along the 200-km fault line that has not experienced an earthquake of magnitude 5.5 or greater.

“While other regions of the San Jacinto fault give rise to small and moderate earthquakes on a regular basis, the Anza Gap is surprisingly quiet, which raises questions about how it is releasing the stress it accumulates,” Ghosh said. “For that reason, many experts suspect that this area is ripe to produce a damaging earthquake.”

Using data from 2011 and a new, highly sensitive detection method developed by Ghosh called “multibeam backprojection,” the researchers uncovered the first evidence of a spontaneous tectonic tremor in the Anza Gap. Relatively little is known about tectonic tremors, which were first identified in Japan in 2001. Researchers now know they are associated with a phenomenon called “slow slip,” a slow and transient movement of plates deep below the earth’s surface that can last from several minutes to several years and may occur daily, annually, or anywhere between, depending on the fault.

“While relatively little is known about tectonic tremors, in part because they have historically been difficult to detect, we know that these tremors are being caused by slow slip deep in the fault, and that when the deep part of the fault slips it adds stress to the shallow part. This may ultimately help to cause a damaging earthquake,” Ghosh said.

Ghosh said seismologists should further study tremor activity in the area to learn how the deep roots of fault zones impact activity closer to the earth’s surface and affect earthquake hazard.

“Tectonic tremors and slow slip will change the way we view faults. For example, our research on the Anza gap shows that the fault is spontaneously slipping at a greater depth than we previously thought, with slow earthquakes occurring between 13 and 24 km deep.”

“Since there is a connection between deep slow slip and damaging earthquakes closer to the surface, it may be possible that tectonic tremors will enable us to forecast major earthquakes in the future. Much more research is needed before that can happen, though.”