A strong earthquake has hit the Hindu Kush mountain range in Afghanistan, causing casualties in the country and in neighboring Pakistan. 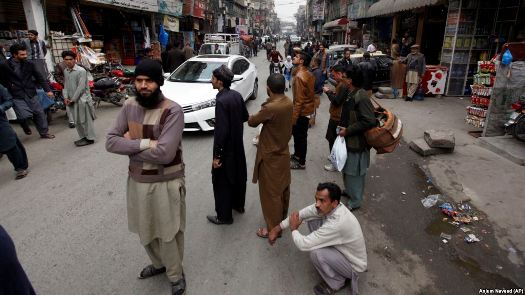 A girl was killed and at least 15 others injured in various parts of Pakistan as a result of the January 31 quake, the newspaper Dawn reported.

At least three people were injured in the northeastern Afghan province of Badakhshan, according to Gul Mohammad Bedar, the provincial deputy governor. However, Bedar said he did not know how they were injured.

Its epicenter of was 35 kilometers south of Jarm in the northeastern corner of Afghanistan near the Tajik border, at a depth of 191 kilometers.

Reports said the quake was felt in Kabul, Dushanbe, Islamabad, and New Delhi.

The Pakistani girl was killed and at least eight other people injured when roofs collapsed on mud-brick homes in the village of Lasbela in the southwestern province of Balochistan, said Asmat Ullah from the provincial disaster-management agency.

In the northwestern city of Peshawar, four girls were injured during a rush to evacuate their school, local official Tauseefur Rehman said.

TV footage showed people fleeing houses, offices, and schools in panic in Islamabad and elsewhere in Pakistan after the quake struck around lunchtime.

“It was scary. We all ran out. We thought roofs and walls are going to fall on us,” Adeel Ahmed from the northern town of Balakot told the dpa news agency.

Mobile-phone signals were temporarily disrupted in both Islamabad and Peshawar due to the quake, Dawn reported.

Kabul residents, already on edge following a series of deadly attacks, also ran out of buildings in panic after the earthquake.

Bedar, Badakhshan’s deputy governor, said that the quake caused cracks in the walls of a number of houses in the province.

He said officials were trying to collect information from the remote districts in Badakhshan, where the Taliban has a strong presence.

Mohammad Mustafa, acting district governor in Jarm, said that authorities had no communications with dozens of villages.

Afghanistan is frequently hit by earthquakes, especially in the Hindu Kush mountain range, which lies near the junction of the Eurasian and Indian tectonic plates.

A 7.5-magnitude earthquake rocked the region in October 2015, killing more than 400 people and leaving several thousand homeless in Afghanistan, Pakistan, and India.

And in October 2005, a 7.6-magnitude quake struck the Pakistani-administered part of Kashmir and killed at least 79,000 people in the country, with additional fatalities reported in India and Afghanistan.