Deep down below us is a tug of war moving at less than the speed of growing fingernails. Keeping your balance is not a concern, but how the movement happens has been debated among geologists. 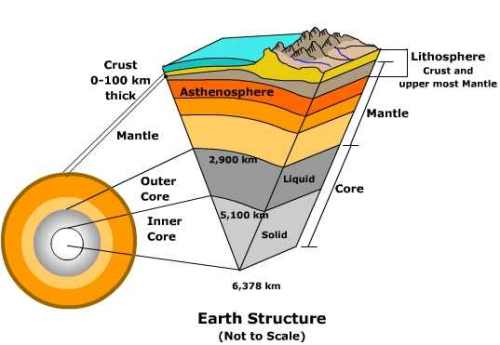 New findings from under the Pacific Northwest Coast by University of Oregon and University of Washington scientists now suggest a solution to a mystery that surfaced when the theory of plate tectonics arose: Do the plates move the mantle, or does the mantle move the plates.

The separation of tectonic plates, the researchers proposed in a paper online ahead of print in the journal Nature Geoscience, is not simply dictating the flow of the gooey, lubricating molten material of the mantle. The mantle, they argue, is actually fighting back, flowing in a manner that drives a reorientation of the direction of the plates.

The new idea is based on seismic imaging of the Endeavor segment of the Juan de Fuca Plate in the Pacific Ocean off Washington and on data from previous research on similar ridges in the mid-Pacific and mid-Atlantic oceans.

“Comparing seismic measurements of the present mantle flow direction to the recent movements of tectonic plates, we find that the mantle is flowing in a direction that is ahead of recent changes in plate motion,” said UO doctoral student Brandon P. VanderBeek, the paper’s lead author. “This contradicts the traditional view that plates move the mantle.”

While the new conclusion is based on a fraction of such sites under the world’s oceans, a consistent pattern was present, VanderBeek said. At the three sites, the mantle’s flow is rotated clockwise or counterclockwise rather than in the directions of the separating plates. The mantle’s flow, the researchers concluded, may be responsible for past and possibly current changes in plate motion.

The research—funded through National Science Foundation grants to the two institutions – also explored how the supply of magma varies under mid-ocean ridge volcanoes. The researchers conducted a seismic experiment to see how seismic waves moved through the shallow mantle below the Endeavor segment.

They found that the middle of the volcanic segment, where the seafloor is shallowest and the inferred volcanic activity greatest, the underlying mantle magma reservoir is relatively small. The ends, however, are much deeper with larger volumes of mantle magma pooling below them because there are no easy routes for it to travel through the material above it.

Traditional thinking had said there would be less magma under the deep ends of such segments, known as discontinuities.

“We found the opposite,” VanderBeek said. “The biggest volumes of magma that we believe we have found are located beneath the deepest portions of the ridges, at the segment ends. Under the shallow centers, there is much less melt, about half as much, at this particular ridge that we investigated.

“Our idea is that the ultimate control on where you have magma beneath these mountain ranges is where you can and cannot take it out,” he said. “At the ends, we think, the plate rips apart much more diffusely, so you are not creating pathways for magma to move, build mountains and allow for an eruption.”