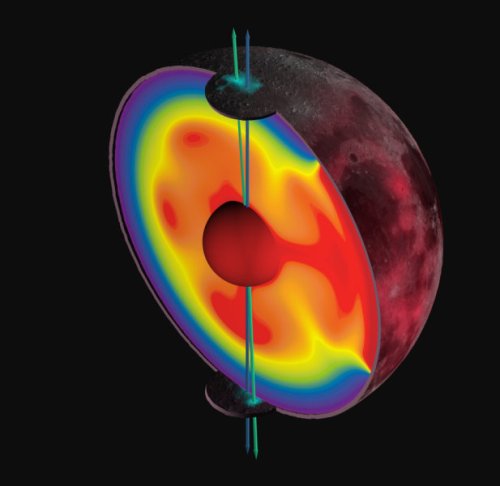 Planetary scientist Matt Siegler at Southern Methodist University, Dallas, and colleagues made the discovery while examining NASA data known to indicate lunar polar hydrogen. The hydrogen, detected by orbital instruments, is presumed to be in the form of ice hidden from the sun in craters surrounding the moon’s north and south poles. Exposure to direct sunlight causes ice to boil off into space, so this ice — perhaps billions of years old — is a very sensitive marker of the moon’s past orientation.

An odd offset of the ice from the moon’s current north and south poles was a tell-tale indicator to Siegler and prompted him to assemble a team of experts to take a closer look at the data from NASA’s Lunar Prospector and Lunar Reconnaissance Orbiter missions. Statistical analysis and modeling revealed the ice is offset at each pole by the same distance, but in exactly opposite directions.

This precise opposition indicates the moon’s axis — the imaginary pole that runs north to south through it’s middle, and around which the moon rotates — shifted at least six degrees, likely over the course of 1 billion years, said Siegler.

“This was such a surprising discovery. We tend to think that objects in the sky have always been the way we view them, but in this case the face that is so familiar to us — the Man on the Moon — changed,” said Siegler, who also is a scientist at the Planetary Science Institute, Tucson, Ariz.

“Billions of years ago, heating within the Moon’s interior caused the face we see to shift upward as the pole physically changed positions,” he said. “It would be as if Earth’s axis relocated from Antarctica to Australia. As the pole moved, the Man on the Moon turned his nose up at the Earth.”

The discovery is reported today in an article in the scientific journal Nature, “Lunar true polar wander inferred from polar hydrogen.” Siegler’s primary co-authors are astrophysicist Richard S. Miller, a professor at the University of Alabama Huntsville, and planetary dynamicist James T. Keane, a graduate student at the University of Arizona.

Planetary bodies settle into their axis based on their mass: A planet’s heavier spots lean it toward its equator, lighter spots toward the pole. On the rare occasion mass shifts and causes a planet to relocate on its axis, scientists refer to the phenomenon as “true polar wander.”

Discovery of lunar polar wander gains the moon entry into an extremely exclusive club. The only other planetary bodies theorized to have permanently shifted location of their axis are Earth, Mars, Saturn’s moon Enceladus and Jupiter’s moon Europa.

What sets the moon apart is its polar ice, which appears to effectively “paint out” the path along which its poles moved.

On Earth, polar wander is believed to have happened due to movement of the continental plates. Polar wander on Mars resulted from a heavy volcanic region. The moon’s change in mass was internal — the shift of a large, single mantle “plume.” Ancient volcanic activity some 3.5 billion years ago melted a portion of the moon’s mantle, causing it to bubble up toward its surface, like goo drifting upward in a lava lamp.

“The moon has a single region of the crust, a large basaltic plain called Procellarum, where radioactive elements ended up as the moon was forming,” Siegler said. “This radioactive crust acted like an oven broiler heating the mantle below.”

Some of the material melted, forming the dark patches we see at night, which are ancient lava, he said.

“This giant blob of hot mantle was lighter than cold mantle elsewhere,” Siegler said. “This change in mass caused Procellarum — and the whole moon — to move.”

The moon likely relocated its axis starting about 3 billion years ago or more, slowly moving over the course of a billion years, Siegler said, etching a path in its ice.

Neutrons can indicate the presence of water or ice

Polar wander explains why the moon appears to have lost much of its ice.

Siegler compares true polar wander to holding a glass filled with water. Most planets are like a steady hand holding a glass, their axis doesn’t shift and the water stays put. A planet whose mass is changing is like a wobbly hand, causing its axis to shift and the water to spill out. Similarly, as Earth’s moon changed its axis, much of its ice ceased to be hidden from the sun and was lost.

Co-author Richard Miller mapped the moon’s remaining ice by using data from NASA’s Lunar Prospector mission, which orbited the moon from 1998 to 1999. The presence of ice is inferred by measuring the energy of neutrons emitted from the lunar surface. Instruments on NASA’s satellite, including a neutron spectrometer, measured neutrons liberated from the moon by a rain of stellar particles scientists call cosmic rays. Low energy neutrons indicate the presence of hydrogen, the dominant molecule in water and ice.

“The maps show four key features,” said Siegler and his colleagues. “First, the largest quantity of hydrogen is offset from the current rotation axis of the moon by roughly 5.5 degrees. Second, the hydrogen enhancements are of similar magnitude at both poles. Third, the asymmetric enhancements do not correlate with expectations from the current thermal or permanently shadowed environment. And lastly, and most significantly, the spatial distributions of polar hydrogen appear to be nearly antipodal.”

Siegler’s discovery opens the door to further discoveries around an even deeper question — the mystery of why there is water on the moon and on Earth. Scientific theory surrounding the formation of the solar system postulates water could not have formed much closer to the sun than Jupiter, Siegel said.

“We don’t know where the Earth’s water came from. It appears to have come from the outer solar system well after the Earth and moon formed,” he said. “Ice on other bodies, like the moon or Mercury, might give us a clue to its origin.”

“The ice may be a time capsule from the same source that supplied the original water to Earth,” he said. “This is a record we don’t have on Earth. Earth has reworked itself so many times, there’s nothing that old left here. Ancient ice from the moon could provide answers to this deep mystery.”