No one can travel inside Earth to study what happens there. So scientists must do their best to replicate real-world conditions inside the lab. 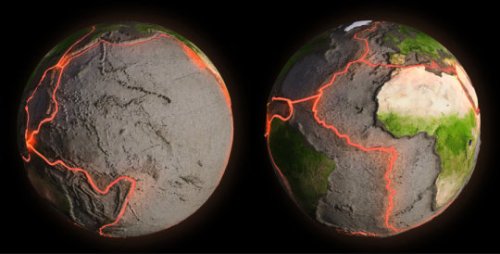 “We are interested in large-scale geophysical processes, like how plate tectonics initiates and how plates move underneath one another in subduction zones,” said David Goldsby, an associate professor at the University of Pennsylvania. “To do that, we need to understand the mechanical behavior of olivine, which is the most common mineral in the upper mantle of Earth.”

Goldsby, teaming with Christopher A. Thom, a doctoral student at Penn, as well as researchers from Stanford University, the University of Oxford and the University of Delaware, has now resolved a long-standing question in this area of research. While previous laboratory experiments resulted in widely disparate estimates of the strength of olivine in Earth’s lithospheric mantle, the relatively cold and therefore strong part of Earth’s uppermost mantle, the new work, published in the journal Science Advances, resolves the previous disparities by finding that, the smaller the grain size of the olivine being tested, the stronger it is.

Because olivine in Earth’s mantle has a larger grain size than most olivine samples tested in labs, the results suggest that the mantle, which comprises up to 95 percent of the planet’s tectonic plates, is in fact weaker than once believed. This more realistic picture of the interior may help researchers understand how tectonic plates form, how they deform when loaded with the weight of, for example, a volcanic island such as Hawaii, or even how earthquakes begin and propagate.

For more than 40 years, researchers have attempted to predict the strength of olivine in Earth’s lithospheric mantle from the results of laboratory experiments. But tests in a lab are many layers removed from the conditions inside Earth, where pressures are higher and deformation rates are much slower than in the lab. A further complication is that, at the relatively low temperatures of earth’s lithosphere, the strength of olivine is so high that it is difficult to measure its plastic strength without fracturing the sample. The results of existing experiments have varied widely, and they don’t align with predictions of olivine strength from geophysical models and observations.

In an attempt to resolve these discrepancies, the researchers employed a technique known as nanoindentation, which is used to measure the hardness of materials. Put simply, the researchers measure the hardness of a material, which is related to its strength, by applying a known load to a diamond indenter tip in contact with a mineral and then measuring how much the mineral deforms. While previous studies have employed various high-pressure deformation apparatuses to hold samples together and prevent them from fracturing, a complicated set-up that makes measurements of strength challenging, nanoindentation does not require such a complex apparatus.

“With nanoindentation,” Goldsby said, “the sample in effect becomes its own pressure vessel. The hydrostatic pressure beneath the indenter tip keeps the sample confined when you press the tip into the sample’s surface, allowing the sample to deform plastically without fracture, even at room temperature.”

“This indentation size effect had been seen in many other materials, but we think this is the first time it’s been shown in a geological material,” Goldsby said.

Looking back at previously collected strength data for olivine, the researchers determined that the discrepancies in those data could be explained by invoking a related size effect, whereby the strength of olivine increases with decreasing grain size of the tested samples. When these previous strength data were plotted against the grain size in each study, all the data fit on a smooth trend which predicts lower-than-thought strengths in Earth’s lithospheric mantle.

In a related paper by Thom, Goldsby and colleagues, published recently in the journal Geophysical Research Letters, the researchers examined patterns of roughness in faults that have become exposed at Earth’s surface due to uplifted plates and erosion.

“Different faults have a similar roughness, and there’s an idea published recently that says you might get those patterns because the strength of the materials on the fault surface increases with the decreasing scale of roughness,” Thom said. “Those patterns and the frictional behavior they cause might be able to tell us something about how earthquakes nucleate and how they propagate.”

In future work, the Penn researchers and their team would like to study size-strength effects in other minerals and also to focus on the effect of increasing temperature on size effects in olivine.