In 1994, a huge 8.2-magnitude earthquake struck a sparsely populated region in Bolivia at a depth of around 400 miles below sea level. Now, an international team of scientists has analyzed data from this event to uncover previously unidentified “mountains” deep within Earth’s interior. 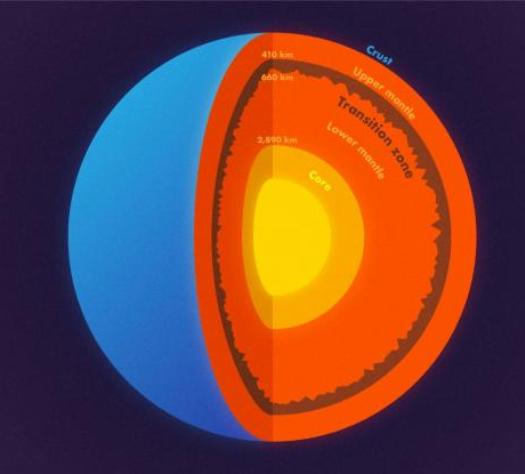 Most of us were taught in school that Earth is divided into different layers: an inner and outer core, the mantle and the crust. But this simplifies the picture slightly because, according to scientists, there is another layer called the “transition zone,” which splits the mantle in two.

To do this, the team had to look deep into Earth’s interior. But since we aren’t able to physically see below the surface, the scientists analyzed the behavior of shockwaves created by earthquakes as they scatter inside our planet to create a picture of what’s going on beneath the surface.

When it comes to this technique, the more powerful the earthquake the better, because stronger shockwaves can travel farther, hence why the team chose to examine the 1994 Bolivia event—the second largest deep quake ever recorded. In fact, shockwaves from quakes with a magnitude of 7.0 or higher are so powerful, that they can travel from one side of the planet to the other and back again.

“You want a big, deep earthquake to get the whole planet to shake,” Jessica Irving, an author of the study from Princeton, said in a statement. “Earthquakes this big don’t come along very often.”

Using Princeton’s Tiger supercomputer, the team examined shockwave data to determine what the top and bottom of the transition zone may look like. This technique works in a similar way to how our eyes enable us to see objects in the environment by detecting scattering light waves.

“We know that almost all objects have surface roughness and therefore scatter light,” said lead author of the study Wenbo Wu, from Princeton. “That’s why we can see these objects—the scattering waves carry the information about the surface’s roughness. In this study, we investigated scattered seismic waves traveling inside Earth to constrain the roughness of Earth’s 660-km boundary.”

Their results show that while the top of the transition zone is mostly smooth, the bottom is very rough in some places, such as the mountainous terrain on Earth’s surface.

“In other words, stronger topography than the Rocky Mountains or the Appalachians is present at the 660-km boundary,” Wu said.

While the scientists could not conduct precise measurements of the height of this terrain, they suggest that these mountains could potentially be bigger than anything similar on Earth’s surface.