The main fault at the foot of the Himalayan mountains can likely generate destructive, major earthquakes along its entire 2,400-kilometer (1,500-mile) length, a new study finds. Combining historical documents with new geologic data, the study shows the previously unstudied portion of the fault in the country Bhutan is capable of producing a large earthquake and did so in 1714. 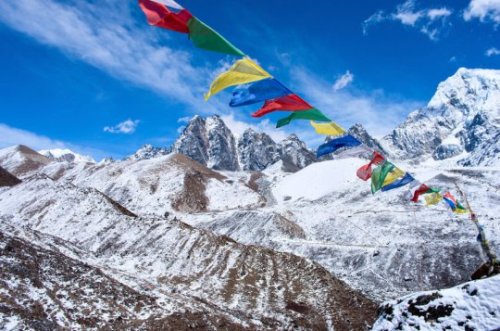 “We are able for the first time to say, yes, Bhutan is really seismogenic, and not a quiet place in the Himalayas,” said György Hetényi, a geophysicist at the University of Lausanne, Switzerland and lead author of the new study accepted for publication in Geophysical Research Letters, a journal of the American Geophysical Union.

The Himalayas have produced some of the world’s largest earthquakes, like the April 2015 Gorkha earthquake that devastated Nepal. But scientists had not been able to prove whether every region along the 2,400-kilometer arc was seismogenic, or capable of producing quakes. Bhutan was one of the last open gaps along the mountain chain: the country had no records of recent major earthquakes and no major seismological work had been done there.

“We provide a longer and therefore more representative record of seismicity in Bhutan, and this makes better hazard estimates,” he said.

The highest mountain range on Earth, the Himalayas are the product of the Indian tectonic plate subducting under the Eurasian Plate. The mountains span a northwest to southeast arc roughly 2,400 kilometers (1,500 miles) long, nearly the distance between the U.S. East and West coasts.

Throughout the 20th century, Bhutan, a small nation east of Nepal sandwiched between India and China, had been relatively isolated from the outside world and scientists were rarely allowed inside its borders. Until recently, researchers thought Bhutan could be the only major segment of the Himalayas not to have experienced a major earthquake in the last 500 years, according to Hetényi.

But, after a magnitude 6 earthquake struck the country in 2009, the government opened the door for scientists to perform geophysical research, Hetényi said.

Hetényi and his colleagues made several trips to the country from 2010 to 2015 to catalog small earthquakes in the area and study how the structure of the Indian Plate changes as it subducts below the crushing belt of mountains. One question they were hoping to answer was whether Bhutan had historically experienced any major destructive earthquakes.

Historical records of earthquakes in Bhutan are rare, but by luck Hetényi stumbled upon a biography of famous 18th century Buddhist monk and temple builder Tenzin Lekpai Dondup. The biography described a quake in early May of 1714 that destroyed the Gangteng monastery Dondup helped build.

The biography and other historical records indicated there were many aftershocks, meaning it could have been a major quake, according to Hetényi.

However, this description alone did not pinpoint where the quake occurred.

“When you only have very local devastation descriptions, you never know whether this devastation is due to an intermediate earthquake that occurred locally, nearby the chronicler, or whether it’s the result of a bigger earthquake that occurred over greater distances,” said Laurent Bollinger, a geologist at the French Alternative Energies and Atomic Energy Commission who was not involved in the new study.

While in Bhutan, several of Hetényi’s colleagues dug trenches around the fault line to see if one side of it had moved vertically with respect to the other side — which would be considered evidence of a major earthquake. That study, led by Romain Le Roux-Mallouf, a geologist at the University of Montpellier, France, found evidence of rock uplift on one side of the fault had taken place between 1642 and 1836. Hetényi combined the results from that study with historical records of the 1714 earthquake to pinpoint where the 1714 quake happened and how large it was.

“It’s a really significant event that happened 300 years ago,” he said.

The results suggest the 1714 quake was significant enough to unzip a large segment of the thrust — possibly between 100 to 300 kilometers (60 to 200 miles) of the fault. The new study closes the seismic gap in the Himalayan arc and could help scientists better understand the earthquake potential in the densely populated Himalaya region, according to Hetényi.