A new international study finds that the Atlantic meridional overturning circulation (MOC), a deep-ocean process that plays a key role in regulating Earth’s climate, is primarily driven by cooling waters west of Europe. 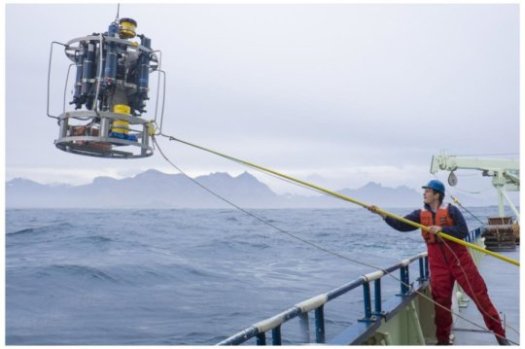 In a departure from the prevailing scientific view, the study shows that most of the overturning and variability is occurring not in the Labrador Sea off Canada, as past modeling studies have suggested, but in regions between Greenland and Scotland. There, warm, salty, shallow waters carried northward from the tropics by currents and wind, sink and convert into colder, fresher, deep waters moving southward through the Irminger and Iceland basins.

Overturning variability in this eastern section of the ocean was seven times greater than in the Labrador Sea, and it accounted for 88 percent of the total variance documented across the entire North Atlantic over the 21-month study period.

These findings, unexpected as they may be, can help scientists better predict what changes might occur to the MOC and what the climate impacts of those changes will be, said Susan Lozier, the Ronie-Rochele Garcia-Johnson Professor of Earth and Ocean Sciences at Duke University’s Nicholas School of the Environment.

“To aid predictions of climate in the years and decades ahead, we need to know where this deep overturning is currently taking place and what is causing it to vary,” said Lozier, who led the international observational study that produced the new data.

“Overturning carries vast amounts of anthropogenic carbon deep into the ocean, helping to slow global warming,” said co-author Penny Holliday of the National Oceanography Center in Southampton, U.K. “The largest reservoir of this anthropogenic carbon is in the North Atlantic.”

“Overturning also transports tropical heat northward,” Holliday said, “meaning any changes to it could have an impact on glaciers and Arctic sea ice. Understanding what is happening, and what may happen in the years to come, is vital.”

Scientists from 16 research institutions from seven countries collaborated on the new study. They published their peer-reviewed findings Feb. 1 in Science.

“I cannot say enough about the importance of this international collaboration to the success of this project,” Lozier said. “Measuring the circulation in the subpolar North Atlantic is incredibly challenging so we definitely needed an ‘all hands on deck’ approach.”

This paper is the first from the $32 million, five-year initial phase of the OSNAP (Overturning in the Subpolar North Atlantic Program) research project, in which scientists have deployed moored instruments and sub-surface floats across the North Atlantic to measure the ocean’s overturning circulation and shed light on the factors that cause it to vary. Lozier is lead investigator of the project, which began in 2014.

“As scientists, it is exciting to learn that there are more pieces to the overturning puzzle than we first thought,” said co-author Johannes Karstensen of the GEOMAR Helmholtz Centre for Ocean Research Kiel, in Germany.

“Though the overturning in the Labrador Sea is smaller than we expected, we have learned that this basin plays a large role in transporting freshwater from the Arctic,” Karstensen said. “Continued measurements in that basin will be increasingly important,” as the Arctic changes unexpectedly.

The new paper contains data collected over a 21-month period from August 2014 to April 2016.