A team of researchers from several institutions in Hungary has conducted experiments meant to test the possibility that the Vikings actually did use sunstones to navigate. In their paper published in Proceedings of the Royal Society A, the team describes the experiments they carried out, their results and why they now believe it is possible to use a sunstone as a navigational aid during times when the skies are covered with clouds. 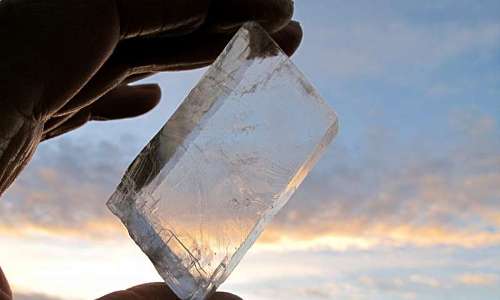 The exploits of the Vikings have been well documented—they conducted raids across Europe from the late 790s till 1066, when the Normans famously conquered England. But as more recent research has established, they were also long-distance seafaring travelers, venturing as far as the Middle East and North America. But how they found their way across vast stretches of ocean has been a bit of a mystery, particularly during times when there were no stars or sun in the sky to guide them. Some historical evidence such as Icelandic legends have mentioned travel under snowy skies using sunstones and a study of a Viking wreck conducted in 2002 revealed that a crystal (Icelandic spar) had been onboard that was found near other implements used for navigation.

Modern sunstone is a type of crystal that, when viewed from different angles, offers a spangled optical effect. In this new effort, the researchers have conducted a study designed to test the possibility that such crystals could really have helped Vikings find their way across the ocean.

To test the third step, the researchers asked 10 volunteers to try to work out the position of the sun in a digital planetarium using dots to stand in for results of using a sunstone. After conducting a total of 2,400 trials, the researchers report that 48 percent resulted in producing an accurate reading to within just one degree. They noted also that the volunteers did best when the virtual sun was near the horizon, showing that the method worked best at dawn and dusk. The team suggests their results indicate that it was possible that the Vikings used sunstones to navigate under cloudy skies.