New research from The University of Texas at Austin reveals that the Earth’s unique iron composition isn’t linked to the formation of the planet’s core, calling into question a prevailing theory about the events that shaped our planet during its earliest years. 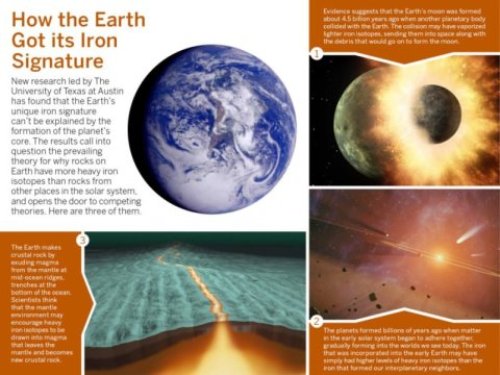 The research, published in Nature Communications on Feb. 20, opens the door for other competing theories about why the Earth, relative to other planets, has higher levels of heavy iron isotopes. Among them: light iron isotopes may have been vaporized into space by a large impact with another planet that formed the moon; the slow churning of the mantle as it makes and recycles the Earth’s crust may preferentially incorporate heavy iron into rock; or, the composition of the raw material that formed the planet in its earliest days may have been enriched with heavy iron.

“The Earth’s core formation was probably the biggest event affecting Earth’s history. Materials that make up the whole Earth were melted and differentiated,” said Jung-Fu Lin, a professor at the UT Jackson School of Geosciences and one of the study’s authors. “But in this study, we say that there must be other origins for Earth’s iron isotope anomaly.”

Jin Liu, now a postdoctoral researcher at Stanford University, led the research while earning his Ph.D. at the Jackson School. Collaborators include scientists from The University of Chicago, Sorbonne Universities in France, Argonne National Laboratory, the Center for High Pressure Science and Advanced Technology Research in China, and the University of Illinois at Urbana-Champaign.

Rock samples from other planetary bodies and objects — ranging from the moon, to Mars, to ancient meteorites called chondrites — all share about the same ratio of heavy to light iron isotopes. In comparison to these samples from space, rocks from Earth have about 0.01 percent more heavy iron isotopes than light isotopes.

That might not sound like much, but Lin said it’s significant enough to make the Earth’s iron composition unique among known worlds.

“This 0.01 percent anomaly is very significant compared with, say, chondrites,” Lin said. “This significant difference thus represents a different source or origin of our planet.”

Lin said that one of the most popular theories to explain the Earth’s iron signature is that the relatively large size of the planet (compared with other rocky bodies in the solar system) created high pressure and high temperature conditions during core formation that made different proportions of heavy and light iron isotopes accumulate in the core and mantle. This resulted in a larger share of heavy iron isotopes bonding with elements that make up the rocky mantle, while lighter iron isotopes bonded together and with other trace metals to form the Earth’s core.

But when the research team used a diamond anvil to subject small samples of metal alloys and silicate rocks to core formation pressures, they not only found that the iron isotopes stayed put, but that the bonds between iron and other elements got stronger. Instead of breaking and rebonding with common mantle or core elements, the initial bond configuration got sturdier.

Co-author Nicolas Dauphas, a professor at the University of Chicago, emphasized that analyzing the atomic scale measurements was a feat unto itself.

“One has to use sophisticated mathematical techniques to make sense of the measurements,” he said. “It took a dream team to pull this off.”

Helen Williams, a geology lecturer at the University of Cambridge, said it’s difficult to know the physical conditions of Earth’s core formation, but that the high pressures in the experiment make for a more realistic simulation.

“This is a really elegant study using a highly novel approach that confirms older experimental results and extends them to much higher pressures appropriate to the likely conditions of core-mantle equilibrium on Earth,” Williams said.

Lin said it will take more research to uncover the reason for the Earth’s unique iron signature, and that experiments that approximate early conditions on Earth will play a key role because rocks from the core are impossible to attain.