The Earth is under constant bombardment by subatomic particles called cosmic rays, including some, known as ultra-high-energy cosmic rays, which pack much more punch than the world’s most powerful particle accelerators. Fortunately, Earth’s atmosphere protects us by dissipating most of that energy before it reaches the ground. 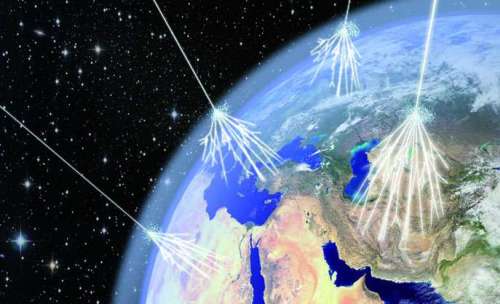 But where do these ultrafast cosmic rays come from, and how are they accelerated to such high energies—one quadrillion (1015) electron volts and more? Scientists have been searching the heavens for answers to those questions for many decades, yet much about the origin and nature of ultra-high-energy cosmic rays remains a mystery.

Now an international team of researchers is trying a different approach. Instead of looking deep into the universe with telescopes, or trying to capture the debris from atmospheric cosmic-ray collisions with particle detectors, they’re trying to duplicate the actual conditions that could contribute to cosmic-ray acceleration right here on Earth, in the National Ignition Facility (NIF) target chamber.

In a NIF discovery science campaign conducted by the Astrophysical Collisionless Shock Experiments with Lasers (ACSEL) collaboration, the researchers are carrying out a series of experiments aimed at understanding the possible role of collisionless shocks and related intergalactic magnetic fields in cosmic-ray acceleration.

In collisionless shocks, the charged particles in a plasma (a medium consisting of freely moving ions and free electrons) pass by largely without colliding with each other; such shocks occur in many astrophysical phenomena including supernova remnants, gamma-ray bursts and jets from active galactic nuclei. NIF is the only facility capable of creating plasmas with sufficiently high density (greater than 1020 particles per cubic centimeter), high flow velocity (greater than 1,000 kilometers per second) and high temperature (greater than 1,000 electron volts) to conduct these experiments. In the scaled NIF experiments, the collisional mean free path—the average distance traveled by a particle between collisions with other particles—is much larger than the experimental volume, yet the collisionless shocks created are similar to the astrophysical conditions observed in space.

The two most recent ACSEL experiments studied high-speed collisionless shock formation by firing more than 125 NIF beams at targets composed of two plastic foils facing each other. The associated magnetic field was backlighted, or probed, by protons from a tiny laser-irradiated sphere known as an “exploding pusher” target filled with a mixture of deuterium and helium-3 (D3He).

This series of experiments was the first to use the D3He-filled exploding pusher, which was developed in collaboration with the Massachusetts Institute of Technology (MIT) Plasma Science and Fusion Center, as the proton backlighter for a physics experiment on NIF.