First, I am compelled to set the record straight as to who was the first to publish their scientific papers as to the source of how Earth’s moon came to be. It was Dr. Tom Van Flandern who past away on the very same date (January 9th) this article was published yet 8 years prior. (see orbit) 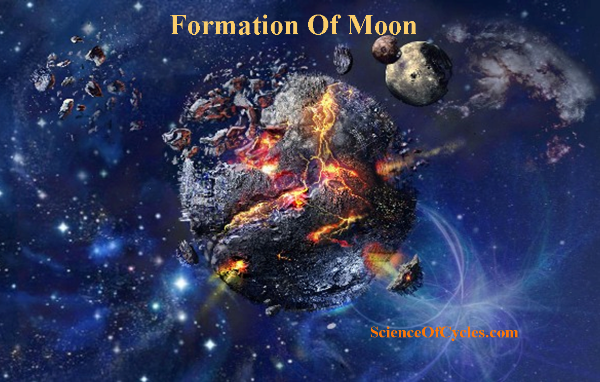 I mention this because he was ridiculed, essentially blackballed, from the astronomical community simply because he stood firm to his convictions. No, not based on some hunch, but hard scientific research filled with countless hours of checking and re-checking his data. The only mention he received in this article was the following:

Raluca Rufu, a researcher at the Weizmann Institute of Science in Israel and lead author of the study are not the first to propose a multiple-impact scenario. Another paper published in 1989 raised that possibility, but “no further work was done on the subject,” Rufu said. “This paper is first to provide extensive calculations that we hope will stimulate others to reexamine the issue.”

In 1989, Dr. Van Flandern published is paper titled “Exploded Planet Hypothesis” identifying the early nature of our solar system. I would call that more than just “another paper published in 1989”. Does this latest article seem to strike a note of a personal nature? Yes it does. It is known Tom was more than just a scientist I had on my show several times, we became friends – he was more of a mentor, perhaps knowing of what I would go through as I was presenting new data supporting my Sun-Earth-Extreme Weather hypothesis.

Dr. Van Flandern’s pedigree far exceeds my own, yet when he could no longer tow-the-line of his colleagues simply because he could not deny the outcome of his research. It was sometime after 1989 he became the target from the very agencies he worked with. From 1963 to 1983, Tom was the top shelf astronomer at the U.S. Naval Observatory becoming Chief of the Research Branch and later becoming Chief of the Celestial Mechanics Branch of the Nautical Almanac Office.

Tom Van Flandern held memberships in the International Astronomical Union, the American Astronomical Society (and in its Divisions on Dynamical Astronomy and Planetary Sciences), and several other scientific organizations. He received second prize from the Gravity Research Foundation in 1974 and the Astronomy Award from the Washington Academy of Sciences in 2000.

And now, in an article published on Jan. 9th 2017, he is addressed as “just some another paper published in 1989 blah blah blah”. They appear to have taken his research mostly known as “Exploded Planet Hypothesis” and renamed it “Multiple Impact Hypothesis”. Yes, this really happened.
See the article below….

Earth’s moon may be the product of many small moonlets that merged after multiple objects as big as Mars collided with Earth, leaving disks of planetary debris orbiting the planet, a new study suggests.

This idea that multiple impacts led to the moon’s birth challenges the most prevalent theory of lunar formation, which suggests that one giant impact led to the formation of the moon. 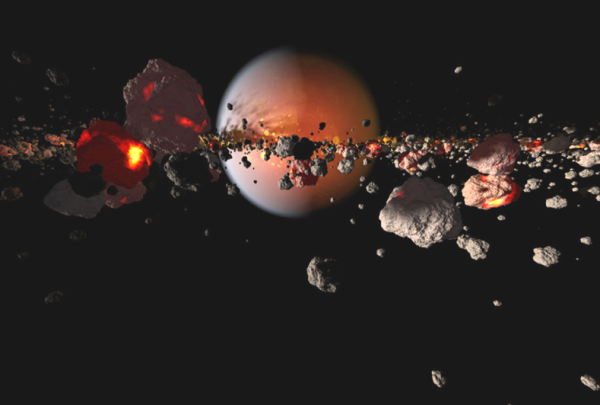 The new, multiple-impact hypothesis suggests that about 20 moon- to Mars-size objects struck the Earth, flinging debris from the planet into orbit. There, the debris formed disks around the Earth that looked somewhat like Saturn’s rings. Over centuries, debris in several disks accreted to form moonlets that migrated farther and farther from the Earth due to tidal interactions. Eventually, the moonlets settled at a distance known as the Hill radius, coalescing to form one big moon.

This process isn’t too far off from the “Giant Impact Hypothesis,” which states that a planet-size rock named Theia struck the Earth, leaving behind a jet of debris that went on to form the moon. But there’s one problem with this theory: it doesn’t provide a good explanation for the strong similarity between the composition of the moon and the Earth.

“The multiple-impact scenario is a more natural way of explaining the formation of the moon,” Raluca Rufu, a researcher at the Weizmann Institute of Science in Israel and lead author of the study, told Space.com. “In the early stages of the solar system, impacts were very abundant; therefore, it is more natural that several common impactors formed the moon, rather than one special one.

In a giant impact scenario, the object that struck the Earth would have needed an Earth-like composition to create a moon that is made of the same materials as Earth. If the impactor were composed of different stuff than Earth, the moon would not be so Earth-like in composition.

Authors of the new study, which was published today (Jan. 9) in the journal Nature Geoscience, performed several numerical simulations of moon-forming processes and determined that a multiple-impact scenario better explains the moon’s Earthly composition.

“Moreover, the composition similarity between the Earth and the moon in the giant impact cannot be explained without using a special Earth-like impactor,” Rufu added. “However, if multiple of bodies contribute to the final moon, their chemical signatures can even out, therefore the traces of the various impacts will be masked.”

Rufu also said that no existing evidence points more strongly to a single-impact hypothesis, though some studies have found that it is possible to reproduce the moon’s composition with a single impact if it strikes with enough angular momentum. Such an impact “will excavate more Earth material; hence the final moon composition is similar to Earth,” she said. “After the impact, the Earth-moon system has to lose the excess angular momentum.”

“To match both compositional and angular momentum constraints, the single giant-impact hypothesis requires such a specific type of collision that the moon’s formation becomes an uncomfortably improbable coincidence,” Gareth Collins, a planetary scientist at Imperial College London who studies impacts throughout the solar system, wrote in an accompanying Nature News & Views article. Collins wrote that the study revives “the hitherto largely discarded scenario that a series of smaller and more common impacts, rather than a single giant punch, formed the moon.”

Rufu and her colleagues are not the first to propose a multiple-impact scenario. Another paper published in 1989 raised that possibility, but “no further work was done on the subject,” Rufu said. “This paper is first to provide extensive calculations that we hope will stimulate others to reexamine the issue.”

Further research into the multiple-impact hypothesis is already underway. One of Rufu’s collaborators, physicist Hagai Perets of the Technion – Israel Institute of Technology, is already working to find out the efficiency of moonlet mergers. Rufu and her adviser also plan to study the moonlet-merging process “to understand the mixing of the moonlets inside the final moon.”