The Sierra Negra volcano on the Galapagos island of Isabela is spewing fountains of lava and plumes of ash. 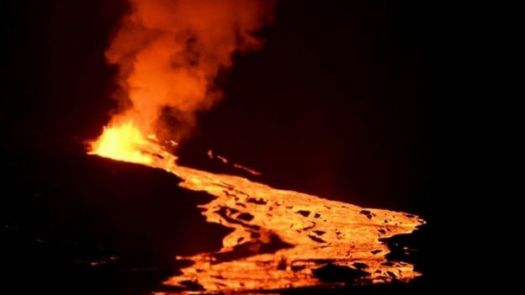 Fifty people have been evacuated from the surrounding area and tourists have been barred from visiting it.

The eruption started after two strong earthquakes opened up fissures in the 1,124m-high (3688ft) volcano.

It comes 11 days after the Cumbre volcano, the most active on the Galapagos, erupted on the uninhabited island of Fernandina.

The Sierra Negra volcano is located on the south-eastern tip of Isabela, the largest of the 18 main islands which make up the Galapagos Archipelago.

The Galapagos which are located about 1,000km (621 miles) off the coast of Ecuador are one of the most volcanically active regions in the world.

Thousands of tourists visit the Galapagos Islands every year, drawn by its unique biodiversity and its pristine environment.

The variety of wildlife on the island famously inspired Charles Darwin to conceive the theory of evolution.