A geomagnetic storm warning has been issued following three coronal mass ejections (CME) from a giant sunspot. The National Oceanic and Atmospheric Administration’s Space Weather Prediction Center said that a minor geomagnetic storm watch is in effect for May 15 and May 16. 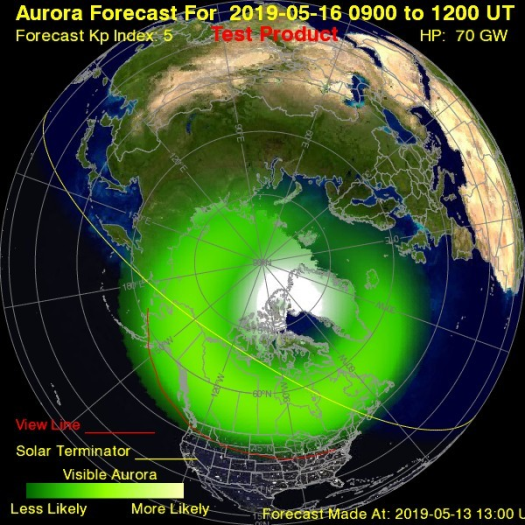 As a result of the storm, northern parts of the U.S. may be able to see auroras over the next few nights. A forecast map showing where the auroras may be visible can be seen below.

CMEs come from our sun’s outer atmosphere. This is a region that has extremely strong magnetic fields. When these fields close, they can suddenly eject matter in a huge explosion—a CME. This matter—sometimes a billion tons of it—is ejected into space, impacting any object it comes across.

When a CME explodes in the direction of Earth, the solar material interacts with atoms and molecules in our atmosphere. The collisions produce auroras.

The three CMEs responsible for the latest geomagnetic storm came from the sunspot group Region 2741. The series started on May 10 and material from the first two is expected to arrive on May 15. The third will likely reach Earth on May 16.

“The source location for the CMEs has been associated with disappearing solar filaments (DSF) along areas of the magnetic neutral line in the vicinity of the unipolar sunspot group, Region 2741,” an NOAA statement said.

A solar filament is a long line of colder material that hovers above the sun’s corona. NASA notes that these filaments can float along like this for days before they disappear. “Sometimes they also erupt out into space, releasing solar material in a shower that either rains back down or escapes out into space, becoming a moving cloud known as a coronal mass ejection, or CME,” the space agency noted.

Sunspots are temporary regions on the surface of the sun that are darker and colder than the surrounding area—around 4,500 degrees Celsius cooler.

According to SpaceWeather, the sunspot that the latest three CMEs came from appears to be disintegrating and is no longer able to produce huge CMEs that pose a greater risk to Earth. When the sun does produce large explosions, a strong geomagnetic storm has the potential to cause disruption to GPS systems, satellites and power grids.

At the moment, the sun is in a period of quiet known as the solar minimum. The sun’s activity increases and decreases on an 11-year cycle. The solar maximum, when activity peaks, sees an increase in the number of sunspots. The next solar maximum is expected to peak around 2024. 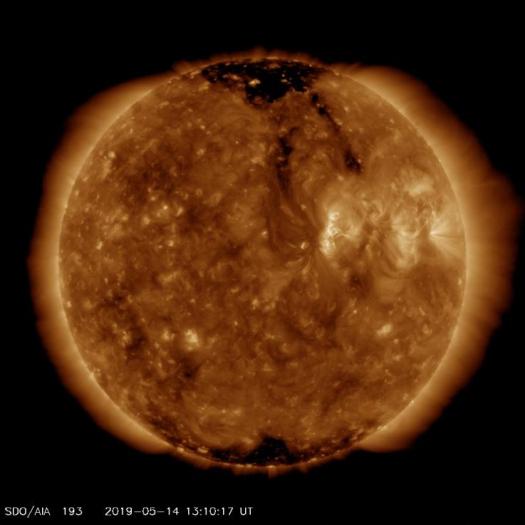