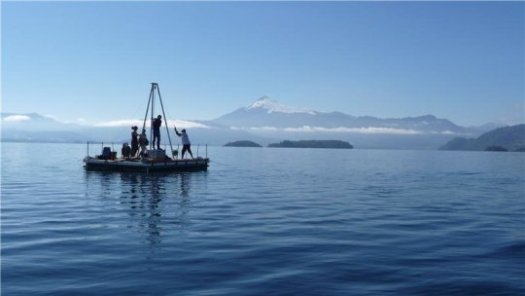 “In 1960, South-Central Chile was hit by the largest known quake on earth with a magnitude of 9.5. Its tsunami was so massive that -in addition to inundating the Chilean coastline- it travelled across the Pacific Ocean and even killed about 200 persons in Japan,” says Jasper Moernaut, an assistant professor at the University of Innsbruck, Austria, and lead author of the study. “Understanding when and where such devastating giant earthquakes may occur in the future is a crucial task for the geoscientific community.”

It is generally believed that giant earthquakes release so much energy that several centuries of stress accumulation are needed to produce a new big one. Therefore, seismological data or historical documents simply do not go back far enough in time to reveal the patterns of their recurrence. “It is an ongoing topic of very vivid debate whether we should model large earthquake recurrence as a quasi-regular or random process in time. Of course, the model choice has very large repercussions on how we evaluate the actual seismic hazard in Chile for the coming decades to centuries.”

In their recent paper in Earth and Planetary Science Letters, Moernaut`s team of Belgian, Chilean and Swiss researchers presented a new approach to tackle the problem of large earthquake recurrence. By analyzing sediments on the bottom of two Chilean lakes, they recognized that each strong earthquake produces underwater landslides which get preserved in the sedimentary layers accumulating on the lake floor. By sampling these layers in up to 8 m long sediment cores, they retrieved the complete earthquake history over the last 5000 years, including up to 35 great earthquakes of a magnitude larger than 7.7.

“What is truly exceptional is the fact that in one lake the underwater landslides only happen during the strongest shaking events (like a M9 earthquake), whereas the other lake also reacted to “smaller” M8 earthquakes,” says Maarten Van Daele from Ghent University, Belgium. “In this way we were able to compare the patterns in which earthquakes of different magnitudes take place. We did not have to guess which model is the best, we could just derive it from our data.”

With this approach, the team found that giant earthquakes (like the one in 1960) reoccur every 292 ±93 years and thus the probability for such giant events remains very low in the next 50-100 years. However, the “smaller” (~M8) earthquakes took place every 139 ±69 years and there is a 29.5% chance that such an event may occur in the next 50 years. Since 1960, the area has been seismically very quiet, but a recent M7.6 earthquake (on 25 DEC 2016) near Chiloé Island suggests a reawakening of great earthquakes in South-Central Chile.

“These Chilean lakes form a fantastic opportunity to study earthquake recurrence,” says Moernaut. “Glacial erosion during the last Ice Age resulted in a chain of large and deep lakes above the subduction zone, where the most powerful earthquakes are getting generated. We hope to extend our approach along South America, which may allow us to discover whether e.g. earthquakes always rupture in the same segments, or whether other areas in the country are capable of producing giant M9+ earthquakes.”

“In the meanwhile, we already initiated similar studies on Alaskan, Sumatran and Japanese lakes,” says Marc De Batist from Ghent University. “We are looking forward to some exciting comparisons between the data from these settings, and see if the Chilean patterns hold for other areas that have experienced giant M9+ earthquakes in the past.”