A rare volcano wall collapse was captured recently on Kīlauea volcano, one of the most active volcanoes in the world. The collapse occurred on February 10th, at 8:21 a.m. local time when a massive chunk of the volcano collapsed. 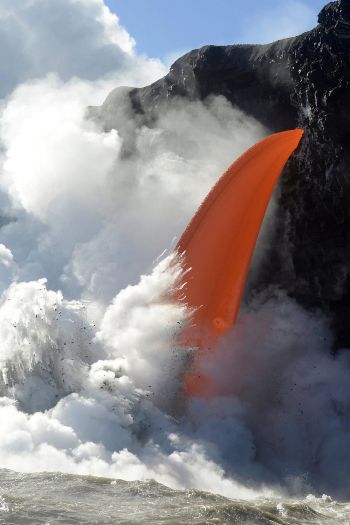 The sudden collapse was on Kīlauea volcano’s active East Rift Zone, specifically on the northeast rim of the west pit in Pu’u O’o. This collapse was coincident with subsidence as the adjacent ground fell. Kīlauea volcano is actively monitored by the USGS on the island, looking for evidence of new eruptions and danger to local communities.

While there have been several new lava channels and points where lava has breached the surface of the island, there are no active threats to the local communities. This is, in part, due to the protected Hawaii Volcanoes National Park, which protects some of the most active volcanic areas of the island from development and tourists.

The Kīlauea East Rift Zone, known locally as Pu‘u ‘Ō‘ō, has been erupting practically continuously for the past 34 years. However, the island of Hawaii has seen an uptick in activity in recent months, with hundreds of millions of gallons of lava flowing into the Pacific Ocean. While the volcano is constantly delivered a new supply of lava from the underlying hot spot, it’s not typical for the lava to flow unabatedly into the ocean for such a long period of time.

The source of this constant lava flow is a massive lava tube running from the volcano to the Pacific Ocean, which lasted over a month, an incredibly long period of time for a lava tube. It eventually collapsed, exposing the cavity of the lava tube as lava flow slowed down.

The USGS estimates that 1-2 cubic meters of lava flowed into the ocean per second, totaling up to 1.576 billion gallons of lava during the lava tube’s month-long lifespan.