The summit crater of Hawaii’s Kilauea Volcano has grown dramatically large since the latest eruption began in May, so large that it may be threatening a museum at Hawaii Volcanoes National Park. 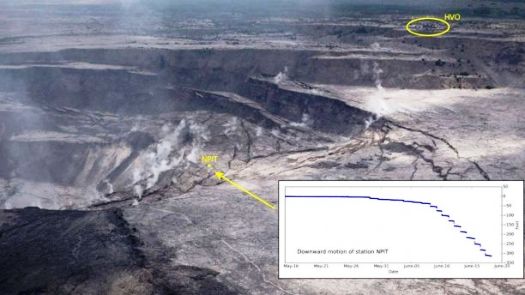 The U.S. Geological Survey said in a Twitter post on Monday that a GPS station location in the Halemaumau Crater was knocked out of service after subsiding 310 feet as the subsidence continues to grow.

Since the eruption started on May 3, sending magma spewing out along fissures in the eastern Puna region of the island, the volcano’s crater has been subsiding. That has caused near-daily earthquakes, rock falls and subsequent explosions at the summit.

“The current slumping and rocksliding is a response to magma draining from the former summit lava lake. However, we don’t know if or when the lake might reappear,” the agency said on Twitter.

The USGS said over the weekend that over 350 earthquakes greater than magnitude 2.5 were reported in a 24-hour peroid at the summit.

On Sunday, the USGS conducted a drone flight over the crater area, showing the dramatic changes as the lava has drained out. According to USGS, the deepest part of Halemaumau is now over 1,300 feet below the caldera floor.