Hidden beneath the waves of the Tyrrhenian Sea near southwestern Italy lies a newfound volcanic mosaic dotted with geothermal chimneys and flat-topped seamounts. 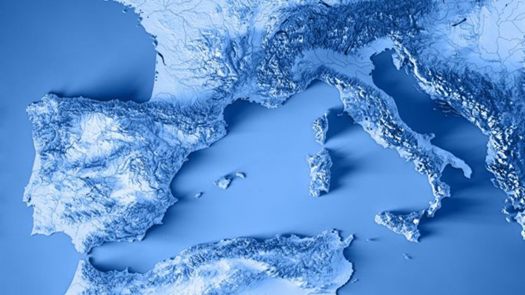 This complex is new to both science and the planet, geologically speaking; it’s only about 780,000 years old. Scientists aren’t particularly surprised to find volcanism in the region, which is home to active volcanoes like Mount Vesuvius and Mount Etna. But the new complex is unusual because it was created by a rare kind of fault, said study leader Fabrizio Pepe, a geophysicist at the University of Palermo, in Italy.

“This is a very complex area,” Pepe told Live Science.

The western Mediterranean is seismically restless because of the collision of three tectonic plates: the African, the Eurasian and the Anatolian. Making matters more complex is a small chunk of crust called the Adriatic-Ionian microplate, which broke off of the African Plate more than 65 million years ago and is now being pushed under the larger Eurasian Plate in a process called subduction. Mount Vesuvius is one of the volcanoes created by subduction.

Previously, scientists discovered a series of undersea volcanic arcs created by this tectonic unrest, starting near the Sardinian coast, with increasingly younger arcs southward and eastward. These arcs were like an arrow pointing ever farther eastward, prompting Pepe and his colleagues to search for an even younger arc about 9 miles (15 kilometers) off the coast of Calabria, called the “toe” of the “boot” of Italy.

There, based on seafloor mapping, seismic data and magnetic anomalies, the researchers found a 772-square-mile (2,000 square km) region of lava flows, volcanic mountains and hydrothermal chimneys; vents in the seafloor allow hot minerals to spew out and form chimney-like structures. They dubbed the new area the Diamante‐Enotrio‐Ovidio Volcanic‐Intrusive Complex, after three flat-topped seamounts (underwater mountains formed by extinct volcanoes) that dominate the seafloor.

STEP by step
Those fractures are what allowed magma to rise to the surface at the Diamonte-Enotrio-Ovidio complex, creating an undersea landscape of lava flows and mountainous volcanoes. These volcanic seamounts are now plateaus because they protruded from the ocean when the sea level was lower, and they eroded into their present, flat-topped shape, Pepe said.

The volcanic complex is inactive, but there are small intrusions of lava in some parts of the seafloor there, the researchers reported July 6 in the journal Tectonics. However, the area could become active in the future, Pepe said, and active volcanism is ongoing on the eastern side of the Tyrrhenian Sea. The researchers are working to build a volcanic risk map of the complex to better understand if it could endanger human life or property. They are also investigating the possibility of tapping the complex to produce geothermal energy.