Phosphorus, which is vital to life but somewhat rare, condensed inside asteroids in the outer Solar System before moving back towards the Sun, where some of it ended up on Earth, according to new research. 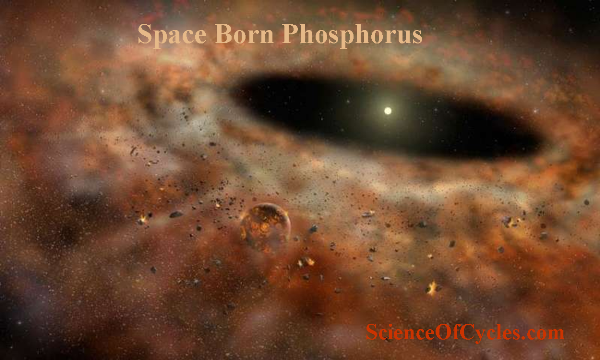 Phosphorus is one of the six main elements that make up the human body, and is a necessary building block for other organisms. However, unlike hydrogen, oxygen, carbon, nitrogen and calcium, phosphorus is rare. It is even more scarce in the rest of the Solar System.

Astrobiologists are tracking phosphorus, hoping that it leads them to signs of other life.

Many meteorites contain phosphorus, and knowing how phosphorus is distributed through the Solar System could help scientists determine where the meteorites came from, depending on the amount and type of phosphorus they contain.

“Phosphorus is one of the key elements in biology,” says Matthew Pasek, an astrobiologist and geochemist at the University of South Florida.

Unlike the other elements essential for life, phosphorus is mainly found in solid form, whereas the likes of hydrogen, oxygen and nitrogen are often found as a gas. “Studying phosphorus keeps us grounded in actual hard rock samples. Unlike the others, there is no obvious gas form, so has to come from rock sources,” Pasek says. “We hope to tie that eventually to biology and life.”

Phosphorus is thought to form in the heart of exploding stars or supernovae. In the case of our early Solar System, everything close to the sun was vaporized, explains Pasek. Then, as the elements moved away from the sun, they grew colder and began to condense into solids.

Meteorites containing phosphorus could have also brought the element, which is essential for life, to Earth. Credit: David A. Aguilar (CfA).
The question behind the paper was, “If phosphorus doesn’t react to form a solid at these high temperatures, then maybe it can form a different type of solid in the cold reaches,” says Pasek.

The gas phosphine (PH3) is the principal volatile phase of phosphorus at low temperatures. Two different groups have proposed that phosphine could play an active role in ice chemistry on the outer edges of the Solar System.

Pasek’s paper aims to determine how quickly phosphorus would react with solids – “very fast”, Pasek quips – and then how long it would take to cool and be attracted back toward warmer environments. Ultimately, the goal was to determine the distribution of volatile forms of phosphorus, such as phosphine, and how they were distributed throughout the Solar System.

According to a theoretical model, which combined thermodynamics, rates at which phosphorus reacts with metals, and gas diffusion models, Pasek’s research found that most phosphorus should be in a solid form everywhere in the Solar System, out to about Saturn. “Phosphorus was depleted as a volatile throughout the developing Solar System, and volatile forms of phosphorus would have been minimal, even in the colder regions of the solar nebula,” the paper says.

Phosphorus should also exist in a form called schreibersite, which is a mineral containing nickel, iron and phosphorus, he says. “We find it in meteorites all the time, and in the more cometary forms. It does imply that pretty much all the meteorites we collect, which have a small amount of phosphide, have to form in this region… This study implies that phosphorus for life comes from solid form, rather than phosphorus from ice.”

Mikhail Zolotov, a research professor at Arizona State University who specializes in volatile elements on other planets, notes that both the abundance and species of phosphorus could affect biological activity.

It was clear from previous studies of meteorites that phosphorus is mainly present in minerals rather than gases. “Earlier models for condensation of hot solar-composition gas indicated formation of phosphorus-bearing minerals observed in meteorites,” says Zolotov.

While he says that Pasek’s paper is a “decent piece of work”, it is contentious that gas movement toward the sun, which was not modeled in the paper, could be faster than the diffusion of gas away from the sun. “Available meteorite data do not indicate phosphorus depletion away from the sun… [and this hypothesis] remains to be confirmed by data from outer Solar System materials such as comets,” he says.

For Pasek, the next step in this research is to experiment with phosphine in the laboratory, and move it into a more practical realm. “We’re going to take pieces of metal and expose them to phosphorus-bearing gas and see how long it takes to make these rocks,” he says. He will then feed that data back into his models.