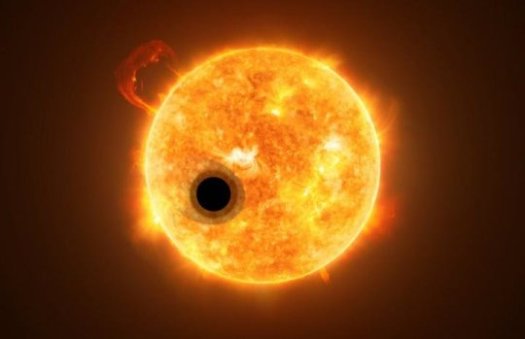 The international team of astronomers, led by Jessica Spake, a PhD student at the University of Exeter in the UK, used Hubble’s Wide Field Camera 3 to discover helium in the atmosphere of the exoplanet WASP-107b This is the first detection of its kind.

Spake explains the importance of the discovery: “Helium is the second-most common element in the Universe after hydrogen. It is also one of the main constituents of the planets Jupiter and Saturn in our Solar System. However, up until now helium had not been detected on exoplanets — despite searches for it.”

“The strong signal from helium we measured demonstrates a new technique to study upper layers of exoplanet atmospheres in a wider range of planets,” says Spake “Current methods, which use ultraviolet light, are limited to the closest exoplanets. We know there is helium in the Earth’s upper atmosphere and this new technique may help us to detect atmospheres around Earth-sized exoplanets — which is very difficult with current technology.”

WASP-107b is one of the lowest density planets known: While the planet is about the same size as Jupiter, it has only 12% of Jupiter’s mass. The exoplanet is about 200 light-years from Earth and takes less than six days to orbit its host star.

The amount of helium detected in the atmosphere of WASP-107b is so large that its upper atmosphere must extend tens of thousands of kilometres out into space. This also makes it the first time that an extended atmosphere has been discovered at infrared wavelengths.

As far back as the year 2000, it was predicted that helium would be one of the most readily-detectable gases on giant exoplanets, but until now, searches were unsuccessful.

David Sing, co-author of the study also from the University of Exeter, concludes: “Our new method, along with future telescopes such as the NASA/ESA/CSA James Webb Space Telescope/, will allow us to analyse atmospheres of exoplanets in far greater detail than ever before.”